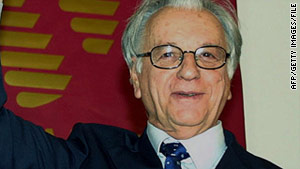 Itamar Franco was president of Brazil from 1993-1994.
STORY HIGHLIGHTS

Franco had been in the intensive care unit of the Albert Einstein Hospital in Sao Paulo after becoming ill with pneumonia after undergoing chemotherapy.

He had been in the hospital's care since May 21, the state-run Agencia Brasil news agency reported.

Franco, who was president from 1993-1994, had served as a senator for Brazil's Socialist People's Party until his death.

He reached the presidency after the resignation of his predecessor, Fernando Collor de Mello, amidst corruption allegations. In addition to being a senator, he also was vice president of his party and formerly the governor of Minas Gerais and mayor of Juiz de Fora, Agencia Brasil reported.