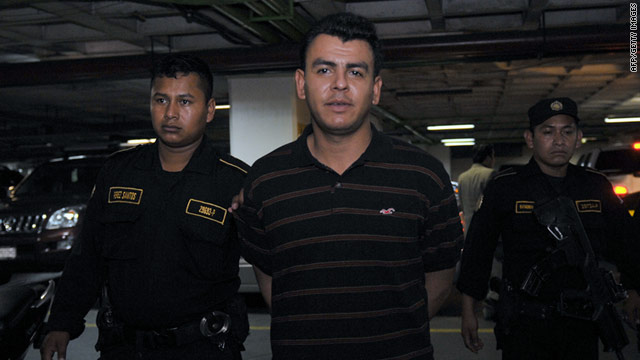 (CNN) -- A local politician in Guatemala had two rivals killed before faking an assassination attempt on himself, presumably to disguise his involvement, authorities said.

Luis Fernando Marroquin, a candidate for mayor of the city of San Jose Pinula, was arrested Tuesday, the country's attorney general and interior minister said. He and two alleged accomplices are charged with murder, illicit association and faking a crime.

Last month, two mayoral candidates were killed and Marroquin survived an alleged gun attack in the city, located just southwest of the capital.

The politicians' killings spoke to the brazenness of the violence that is known to rear its head in the Central American country. But, authorities say, there will not be impunity this time.

Marroquin, the officials said, had conflicts with two other contenders, Augusto Enrique Ovalle Barrera of the Unionist Party and Carlos Enrique Dardon of the Compromise, Renovation and Order Party. Marroquin reportedly pulled down his opponents' campaign posters and threw them away.

Marroquin belongs to the Renewed Democratic Freedom Party, or LIDER.

Authorities linked two guns to some or all of the three incidents, but something about the alleged attack on Marroquin didn't add up, officials said.

The candidate claimed he was saved by a bulletproof vest he was wearing. But an investigation of the vehicle showed that at least three bullets had entered the driver's seat, meaning that if Marroquin was there, they would have gone through him and his vest

"No one who would've been sitting there in that position would have survived such an attack," Attorney General Claudia Paz y Paz said.

Furthermore, the bullet marks on the vest that Marroquin supposedly wore did not match the bullet holes in the car, she said.

In addition to Ovalle, two others were killed in that attack.

The day after the alleged attack against Marroquin, he left Guatemala for El Salvador and returned a few days later, Interior Minister Carlos Menocal said. But then he left for El Salvador again, and then re-entered Guatemala without passing through customs, he said.

The investigation, which did not have witnesses to rely one, was proof that Guatemalan investigators could do the scientific testing on evidence to solve crimes, Menocal said.

"We think this is a good hit against impunity," he said.

The killings of the politicians and alleged attack on Marroquin had the residents of San Jose Pinula fearing for their safety.

"The investigation shows that (the killings) were related to politics and the general population was not targeted. They can be calm now," Menocal said.

In a report last month, the International Crisis Group warned that elections-related violence and unregulated campaign finance were putting the country's political institutions at risk.

The Brussels-based nonprofit described the 2007 elections as "the bloodiest in decades," with more than 60 attacks and at least 40 assassinations.

"Impunity, divisive campaigning and the broader intensification of violence in society threaten an at least equally deadly election in 2011," the report said.