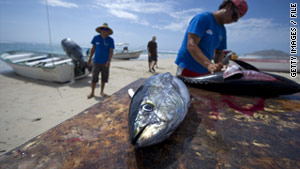 The U.S. Coast Guard has suspended its search for 7 Americans missing on a charter fishing boat off the Baja, California coast.
STORY HIGHLIGHTS

For more on this story, see CNN affiliate KRON

(CNN) -- The U.S. Coast Guard suspended its search Tuesday for seven Americans who have been missing since a charter fishing boat sank off the coast of Mexico nine days ago.

"Despite the thorough search of the region by Mexican and U.S. search teams, no signs of the missing men were found," U.S. Coast Guard Rear Adm. Joseph "Pepe" Castillo said in a statement.

Family members said they hoped to raise enough money for a private search effort to find the missing men and wreckage from the boat, which sank in the Sea of Cortez July 3.

Since then, devastated family members and friends have scrambled to get information from officials on both sides of the border and listened to survivors' terrifying accounts of the night the boat capsized.

"It's just a terrible waiting game," said Cathy Lambiase, whose uncle -- Al Mein, 62, of Twain Harte, California -- is among the missing. "I didn't realize all the politics involved to bring them home."

Family members received word from U.S. consular officials Tuesday that the U.S. Department of Defense had denied a request to send deep-sea divers to the scene.

"We are sympathetic to the loss of life, but unfortunately our limited capability for operating at this depth is currently unavailable, and will remain unavailable, in the near term," Defense Department spokesman Lt. Col. Robert Ditchey said in a statement. "It is our assessment that contract support is the only available option to recover the missing U.S. citizens."

But on a "Find our Fathers" Facebook page and a blog created to drum up support for the search, friends and family members continued a campaign aimed at convincing U.S. officials to reverse the decision.

Joseph Jacinto, Mein's stepson, said survivors' stories made it clear to him that his stepfather and several others likely were trapped inside the boat, as it was swallowed by the sea. But family members want divers to search underwater for the wreckage and their loved ones' remains "to have closure," he said.

"It would answer a lot of questions. It would take a lot of tension away," said Jacinto, who drove last week from San Diego, California, to San Felipe, Mexico, where he spent days handing out flyers and searching the waters with the help of local fishermen.

The U.S. Coast Guard said its aircraft searched more than 7,300 miles on 10 missions to the area near where the boat sank.

The Mexican Navy has not released a statement on the search for more than a week.

At least one American was killed when the boat with more than 40 people aboard sank into rough waters near Isla San Luis, Mexico.

"In the starlight, I could see the guys running around and the back end was going under," survivor Gary Hanson told CNN affiliate KRON last week. "They got off the boat and I saw the boat stand up on end ... it stood there, all by itself ... and then it just slipped under the water, just like the Titanic, it just went straight down."

She described her father-in-law as "the family's sunshine" and a decorated Vietnam veteran.

"I just feel like we should give him the chance to be found," she said.