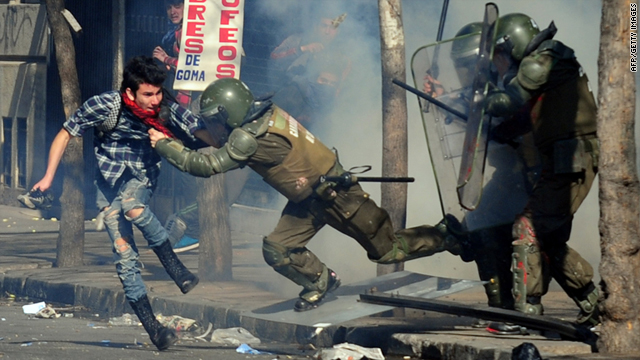 The march in Chile's capital began peacefully but ended with tear gas flying in clashes between protesters and police. At least 64 people were detained in Santiago, the country's national police said.

CNN Chile reported that more than 30 police officers were injured -- one of whom was hit by a Molotov cocktail.

Waving banners as marching-band drums played, a sea of about 30,000 people surged through the capital's streets toward its central avenue, CNN Chile reported. Authorities accused protesters of proceeding along an unauthorized route.

Thursday's march was the latest in a series of protests that began weeks ago in the South American nation. Students have been demanding lower tuition and other reforms in the nation's education system.

Posters promoting Thursday's demonstration showed a picture of am adhesive bandage alongside the words, "We don't want more patchwork fixes."

"We are waiting for deeper changes," Giorgio Jackson, president of the student union at the Pontifical Catholic University of Chile, told CNN Chile.

Pinera repeated calls for an end to the protests Thursday.

"I am convinced as Chile's president that the moment has come to stop the violence, the sit-ins, the work stoppages, that have caused so much destruction and damage, and we will find once again the path of dialogue, agreements and action," he said.