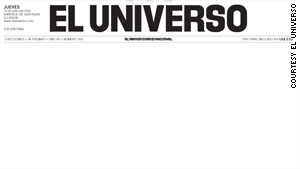 The cover of El Universo as seen Thursday in reaction to a judge's ruling against the paper.

Quito, Ecuador (CNN) -- There were no articles on the front page of Ecuador's El Universo newspaper in reaction to a judge's ruling that the publication had libeled the country's president.

White space filled most of the front page below the newspaper's name. A boldface quote at the bottom from author Ayn Rand said, in part, "When you see corruption being rewarded and honesty becoming a self-sacrifice, you may know that your society is doomed."

A judge's ruling Wednesday sentenced the newspaper's directors and its former opinion editor to three years in prison and ordered them to pay $30 million for an opinion article about President Rafael Correa. The judge also ordered the newspaper to pay $10 million.

Correa's attorney heralded the ruling, but said he planned to appeal over the amount of money the judge awarded. Correa had asked for a judgment of $80 million.

The newspaper and its former opinion editor also vowed to appeal.

Press freedom organizations reacted swiftly to the judge's decision, saying the case shows that Correa aims to crack down on critics by restricting the media.

"This is a very hard hit against freedom of expression," said Carlos Lauria, senior Americas program coordinator at the Committee to Protect Journalists. "We believe it goes against the emerging current in Latin America."

For four lines in an article, they want to take $80 million from me and El Universo ...
--Emilio Palacio, columnist and former opinion editor, El Universo
RELATED TOPICS

The Inter-American Commission on Human Rights also weighed in. Its special rapporteur for freedom of expression called the ruling a "grave warning to any citizen or media outlet that has opinions or information about public officials that could be considered offensive."

"High public officials are ... obligated to be more tolerant of criticism," the rapporteur's office said in a statement.

The columnist and former opinion editor, Emilio Palacio, told CNN en Español that the president's lawsuit was motivated by a desire to send a message to other reporters who are critical of the government -- and by financial gain.

"We are living in a country where you cannot say what is happening over fears they will put you in prison. For four lines in an article, they want to take $80 million from me and El Universo, not for the state, not to build schools, but so that they go to the president's pockets," he said.

Correa's attorney said Thursday that the president would not benefit financially from the lawsuit, and that any money Correa receives will go to the Yasuni-ITT environmental project.

"He does not want to be left with a single cent ... What we are looking for here is a defense of honor," attorney Alembert Vera told CNN en Español.

Correa argued that the article, which referred to him as a dictator, unjustly claimed he had ordered security forces to open fire at a hospital full of civilians in September.

Palacio said he was not accusing the president of ordering an attack on innocent civilians but instead was saying that a future president who is an enemy of Correa's could make such an accusation.

Palacio said he planned to appeal the judge's ruling, arguing that he was not given an opportunity to present evidence in court.

He resigned from his post at El Universo last week, saying he was innocent but wanted the lawsuit to end. On Wednesday, he said Correa was trying to break him and his former colleagues.

Vera, Correa's attorney, said the newspaper's lawyers faltered by attempting to try the case in the court of public opinion rather than in the courtroom.

"They did it day and night, a systematic media campaign, when they should have made a legal defense. That is why they lost their case," he said.

"Let us remember this day as the birth of true freedom of expression," Vera added. "Justice has been done."