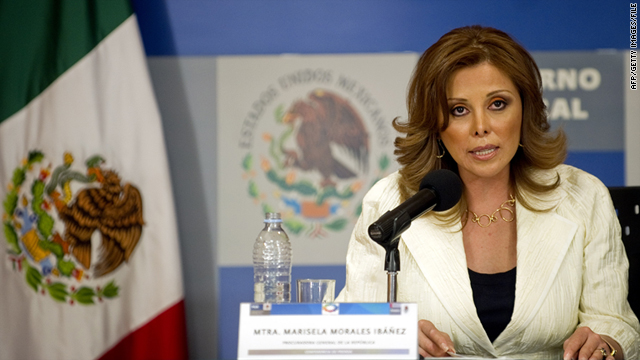 (CNN) -- Less than four months in office, Mexico's attorney general has overseen the firing of 140 police officers and investigators and has more than 280 others under investigation.

Attorney General Marisela Morales told reporters this week that 424 personnel were in dismissal proceedings, and a report obtained by CNN confirmed that 140 have already been let go.

The shake-up at the attorney general's office, which plays a pivotal role in the country's fight against the drug cartels, is the most public show of transparency in recent history.

The last time there was a purge at the agency, known by its Spanish initials PGR, was 2008, when 35 agents belonging to the anti-organized crime unit were fired. Some 600 agents were fired between then and March of this year, but those personnel changes were made quietly.

Of the 140 already fired in the current purge, 74 were let go because they failed so-called "confidence exams" that include polygraph testing and reviews of financial records.

Others were let go for more serious breaches.

Eighteen officials were fired because they face criminal charges for things such as organized crime, murder, robbery and extortion, the report said. Another seven were let go because they were convicted of crimes such as kidnapping, murder and extortion.

In Mexico, where corruption is a problem, purges happen occasionally, but usually at the state or local level. In one of the most recent cases, federal police took over policing duties in a number of cities in the border state of Tamaulipas.

"These are positive steps that they are taking to clean up the police force," Andrew Selee, director of the Mexico Institute at the Woodrow Wilson International Center for Scholars, told CNN.

The PGR has been notoriously ineffective because of penetration from organized crime, Selee said, and for that reason a question worth asking is if they are firing the right people. Is the agency capable of finding and rooting out the bad apples?

A majority of those already fired belonged to the federal ministerial police -- the agency whose officers gather evidence to use in trials. Because of that key role, theirs is a unit ripe for cartels to target with bribes, Selee said.

"If they have decided to stake the future of the PGR on making sure they have the right agents on the job, it would make a big difference" in the battle against the drug cartels, he said.

Also, Morales' decision to publicly air the dismissal of the agents is a good sign of transparency, said Sylvia Longmire, an independent drug war analyst and author of the upcoming "Cartel: The coming invasion of Mexico's drug wars."

"It's good for public morale to see this," she told CNN.

For a purge to be effective, it is just as important how new officers are recruited, Longmire said.

To keep corruption from being a recurring problem, the PGR should take advantage of new vetting programs, some with funding from the United States, she said.