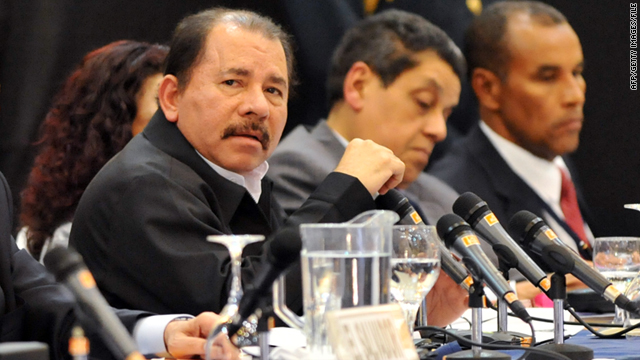 Nicaraguan President Daniel Ortega has said he would call for a referendum to discuss the payout claim.
STORY HIGHLIGHTS
RELATED TOPICS

(CNN) -- Nicaraguan President Daniel Ortega opened the door to the possibility of his country going back to international bodies in an attempt to get a $17 billion payout from the United States.

But the United States considers the case closed, according to William Ostick, a State Department spokesman.

The money was originally awarded to Nicaragua in 1986 by the International Court of Justice in the Hague. Nicaragua had gone to the court alleging that American involvement in their civil war by arming, financing and supplying the Contra fighters was a breach of international law. The Central American country also alleged that U.S. overflights and attacks on Nicaraguan ports violated its sovereignty.

The court sided with Nicaragua, and ruled that the United States was to pay reparations. Nicaragua asked for $17 billion, though an amount was never set.

"In due time we will call for a referendum," Ortega said Tuesday, referring to the revival of the claim.

Ortega was speaking at an event commemorating the fall of former dictator Anastasio Somoza, which brought the Sandinistas to power. The aim of the Contras was to destabilize the Sandinistas, the party Ortega belongs to.

The president said he would call for "a referendum so that the people ... say whether or not we collect this debt that the 'Yankee' government owes."

"Nicaragua has a legitimate position to be entertained and debated," said Larry Birns, director of the Council on Hemispheric Affairs.

However, it is unlikely that Ortega would seek such a referendum, which would stir the pot with the United States, he said.

In some ways, Ortega has proven to be more pragmatic in his actions than his rhetoric suggests, Birns said.

If Nicaragua chooses to revive the lawsuit, it could be because the impoverished nation sees the $17 billion -- or even a settlement at a fraction of that amount -- as a quick boost to the country, he said.

The case is most likely closed forever, said Fred Morrison, a law professor at the University of Minnesota who was on the U.S. legal team in the first phases of the case.

When Nicaragua dropped its claim, it did so by stating in a letter that it "had decided to renounce all further right of action based on the case and did not wish to go on with the proceedings."

There is a precedent that such declarations are binding, Morrison said.

"I would think the case is now closed," he said.