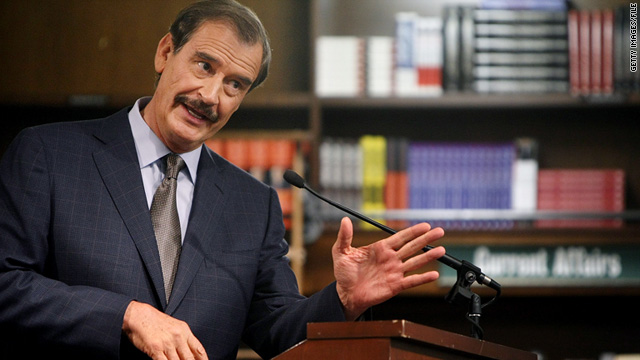 (CNN) -- Part of the solution to end drug violence in Mexico should include legalizing drugs like marijuana for personal use, former President Vicente Fox told CNN en Espanol.

"In order to get out of this trap (of drug violence caused by organized crime), I'm specifically proposing the legalization of the drug," Fox said during a visit to Puerto Rico, where he was speaking at a conference for small business owners in the city of Fajardo.

Fox advocated decriminalizing marijuana in a 2009 interview with CNN en Espanol. Since then, he has repeatedly called on officials to rethink drug laws.

In an interview that aired on CNN en Espanol Tuesday, he also said the Mexican government should "retire the army from the task of combating criminal gangs."

Current Mexican President Felipe Calderon has sent as many as 50,000 troops to hot spots around Mexico to fight the drug cartels. The enforcement strategy is considered a pillar in Calderon's overall anti-drug policy. Both Calderon and Fox belong to the conservative PAN (National Action Party).

Ex-President Fox, a former Coca-Cola executive who was the president of Mexico from 2000 to 2006, said the Mexican government should also "demand that the United States do its part."

"The United States has a huge responsibility. It's not enough that they give us (Mexico) a tip, saying 'Here's 500 million dollars. Go do your homework. You can pay us back with blood and with dead bodies,' " Fox said.

Mexican drug cartels buy their weapons and launder drug money in the United States, he said.

Fox said Mexico has fallen into a trap "between the gigantic U.S. drug market and the (illicit) drug producers in South American countries like Colombia, Venezuela, Bolivia, Ecuador and others.

Fox is not alone in advocating for legalization of some drugs for personal use. Two years ago, three former Latin American presidents proposed radical changes in drug policy for the region.

Brazil's Fernando Henrique Cardoso, Colombia's Cesar Gaviria, and Mexico's Ernesto Zedillo wrote in the 2009 final report of the Latin American Commission on Drugs and Democracy that "Prohibitionist policies based on the eradication of production and on the disruption of drug flows as well as on the criminalization of consumption have not yielded the expected results. We are farther than ever from the announced goal of eradicating drugs."

The same conclusion was reached by the U.N.'s Global Commission on Drug Policy last month. The commission, comprised of former presidents (including Fox), policymakers and leaders from all over the world, recommended that governments experiment with drug legalization, especially marijuana.

CNN's Dania Alexandrino in Puerto Rico contributed to this report.