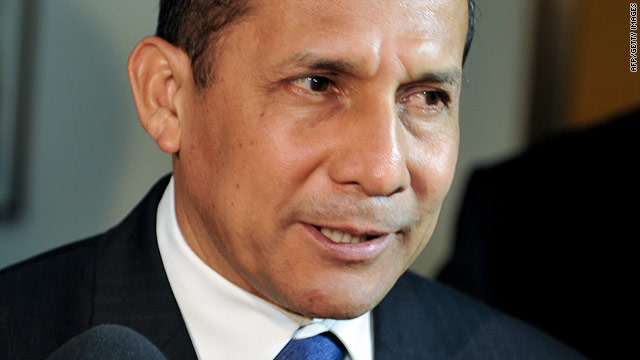 (CNN) -- Ollanta Humala, a left-leaning Peruvian politician who promises reforms in education and services to the poor, was sworn in as the nation's president Thursday.

In his first address as president, Humala stressed equality, saying he wants Peru to be "a place where everyone enjoys the same rights to abundance and happiness."

"Economic growth and social inclusion must march together," he said of his governing philosophy.

He succeeds Alan Garcia, who oversaw a period of robust economic growth as president, but who nonetheless was unpopular and criticized for promoting business at the expense of indigenous groups and the environment.

Humala, an ex-army officer who ran unsuccessfully for president in 2006 as a leftist ally of Venezuela's Hugo Chavez, reinvented himself as a more moderate leader.

He calmed markets and worries that his moderation was a facade to win the election by naming a Cabinet made up of political moderates.

The new president has promised to spread the benefits of Peru's economic boom to the poor. He has cited needs to improve the nation's infrastructure, water, sanitation and education, particularly in rural areas.

A number of presidents from other Latin American countries, including Ecuador, Chile and Brazil, were on hand to witness the swearing-in ceremony.

There was a small oddity during the swearing in of Humala and his two vice presidents, when they all swore allegiance to Peru's 1979 Constitution. That document, however, was replaced in 1993 by a new one drafted during the presidency of strongman Alberto Fujimori. Humala defeated Fujimori's daughter, Keiko, to win the presidency.

The slap at the current Constitution resulted in boos and shouts from members of Fujimori's party.

Several times in his speech, Humala talked about the importance of unity.

"Reality requires a new social contract that makes it possible for all Peruvians to live together," he said.

He added that he wants "to be seen as a defender of human rights and of freedom of the press and expression." Other leftist leaders in Latin America, such as Ecuadorian President Rafael Correa and Venezuela's Chavez, have been criticized by press freedom organizations for clamping down on the media.

Humala promised change, but warned that it would not be as swift as his critics fear, or as some of his supporters desire.

To be lasting, he said, "any changes must be gradual and rational."

In another minor controversy, the outgoing president, Garcia, did not attend the swearing-in ceremony to pass the presidential sash to his successor. Garcia, who was also president in a disastrous term from 1985 to 1990, was booed and heckled by Congress when he bid farewell. According to local media, he decided not to attend this time to avoid another round of heckling.