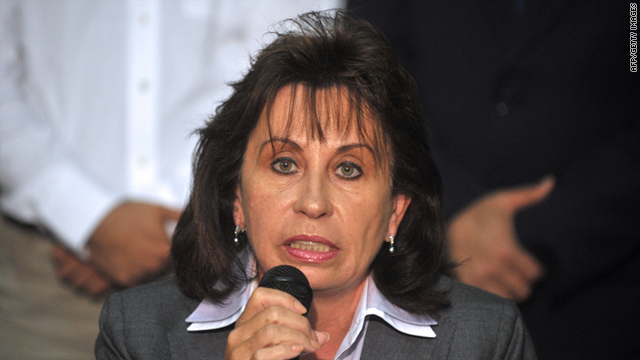 Guatemala City, Guatemala (CNN) -- Former Guatemalan first lady Sandra Torres lost her bid before the country's Supreme Court to run for president, months after her divorce from President Alvaro Colom amid speculation the split was a political move.

Torres jumped in the race for president on March 9, but close relatives of the president are constitutionally barred from running. The couple filed for divorce on March 11; the divorce was finalized in April.

"Obviously, in trying to get around this law ... legal fraud was committed," he said.

The court voted 12-1 against Torres, who presented her case in a public hearing Friday.

The former first lady argued that preventing her from running would violate her human rights "and the rights of millions of Guatemalans that have lived in political oblivion, in economic oblivion and now have the right for a candidate to represent them."

Obviously, in trying to get around this law, as the tribunal ruled, legal fraud was committed
--Guatemalan Supreme Court Chief Justice Luis Archila
RELATED TOPICS

In an interview with CNN en Espanol the day before she filed for divorce, Torres declined to say whether divorce was an option to see her candidacy go forward.

She did say, however, that she and her husband had an "excellent relationship" and that she was very happy.

Torres claimed that under Guatemala's civil code, marriage does not constitute a relation that is banned under the constitution, and she said that her candidacy was legitimate even without divorce.

"I have the legitimate right to participate, the political right, the human right, to be a presidential candidate," said Torres, a former businesswoman and clothing exporter.

Torres still has one more chance. She could appeal to the Court of Constitutionality, which was created last April. As its name indicates, the court deals exclusively with interpretation of constitutional law.

Guatemala will hold presidential elections September 11. The winner will take office in January 2012 for a four-year term. So far, six hopefuls have officially registered their candidacies with Guatemala's Supreme Electoral Tribunal. As many as 11 candidates are expected to run.