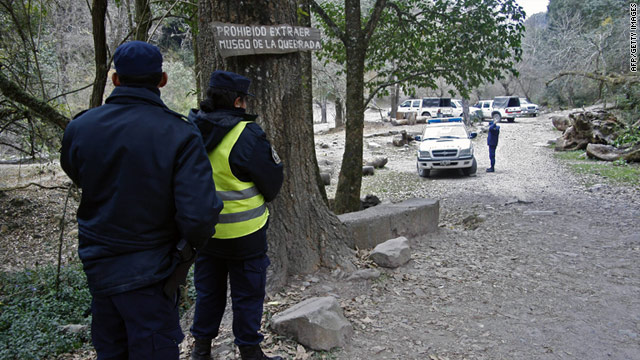 Police officers on Saturday stand at the entrance to a hiking trail where two French tourists were killed in Salta, Argentina.
STORY HIGHLIGHTS
RELATED TOPICS

Buenos Aires (CNN) -- Police in Argentina are investigating the slaying of two French tourists who were found dead near a hiking trail, authorities said.

Other tourists found the bodies of the female victims, who were both around 30 years old, the state-run Telam news agency said. They were last seen in the hostel where they were staying on July 16.

The women were "viciously" killed, one shot in the head and the other in the back, Telam reported, citing Marcelo Baez, a spokesman for the judicial authority in Salta province.

Baez said authorities suspect they could have been held for several days before being killed. Their bodies were found Friday, the Salta government said in a statement.

Their bodies were found in the area of the San Lorenzo ravine in northern Argentina.

Salta's governor called on authorities to quickly investigate the case.

French diplomats were scheduled to head to the province, the French foreign ministry said in a statement Sunday.

"We have every confidence in the Argentinian authorities, with whom we are in constant contact to get to the bottom of the killings so that those responsible are identified and brought to justice," the statement said.