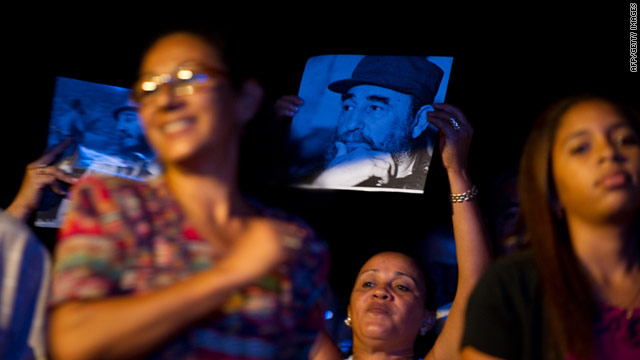 Cubans hold up pictures of former Cuban president Fidel Castro during a concert on August 13 at the Karl Marx theater in Havana.
STORY HIGHLIGHTS
RELATED TOPICS

(CNN) -- Fidel Castro's 85th birthday passed quietly Saturday -- in stark contrast to the week of celebration that preceded it.

The week of events to mark Castro's birthday culminated Friday with a gala. The so-called "Serenade to Fidelity" was marked by a three-hour performance by artists from Europe and Latin America, including the Grammy-award winning female voice of the Buena Vista Social Club, Omuara Portundo.

Revolutionary fighters from the 1953 Moncada barracks attacks, considered to be the starting point of the Cuban revolution, participated in the event.

Castro was born on August 13, 1926, to a wealthy Spanish landowner and his household servant.

Considered "the father" of Latin American socialism, Castro is an icon to many leaders of Latin America's emerging left, who grew up in a generation of U.S.-backed dictatorships.

Castro ruled Cuba as until he officially stepped down in 2008 and handed powers to his brother, Raul Castro.

Castro, who appears to be frail and in poor health, has not been seen in public in recent days.