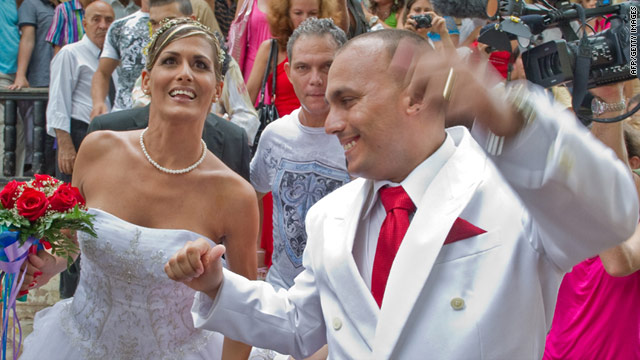 Havana (CNN) -- The bride pulls up in a vintage American convertible and steps out in her frilly, rented gown. The crowds cheer as they throw rice in her direction.

"It's the happiest day of my life," she gushes.

But Wendy Iriepa is not your average bride. She is a male-to-female transsexual. Her groom, Ignacio Estrada, is a gay man who is a gay rights activist and outspoken dissident.

They are calling this the first gay wedding in Communist Cuba.

"It's a step forward for the gay community," Estrada told the throngs of foreign journalists and curious onlookers who crowded the steps to the local Marriage Palace.

The couple held the wedding on Fidel Castro's birthday as a way to raise awareness about gay rights.

"We want August 13th to be more than our wedding date," Estrada said. "It's also a song of freedom. It could mark a new beginning for the gay community."

At the start of Fidel Castro's revolution, gays and transsexuals were locked up or sent to labor camps.

Now it's Fidel's niece Mariela Castro, the daughter of current President Raul Castro, who is leading the battle against homophobia.

As head of the National Sexual Education Center, she has worked from within the system to educate police and party members, promoting discussions and a colorful but very short parade every year.

With her help, Cuba has been offering free sex changes since 2007.

Wendy Iriepa was one of the first to benefit. Which is why, technically, her wedding is legal.

Despite efforts by Mariela Castro, gay unions are illegal.

Prominent dissident Yoani Sanchez was the maid of honor at Saturday's ceremony, which was attended by a couple dozen family and friends, many of them from the opposition and gay communities.

Iriepa once worked for Mariela Castro, but they became estranged when she fell in love with Estrada earlier this year.

He argues gays should be allowed to marry and have the right to congregate and march without getting state approval.

But for now, the married couple plans to put politics behind them and enjoy their honeymoon in private.