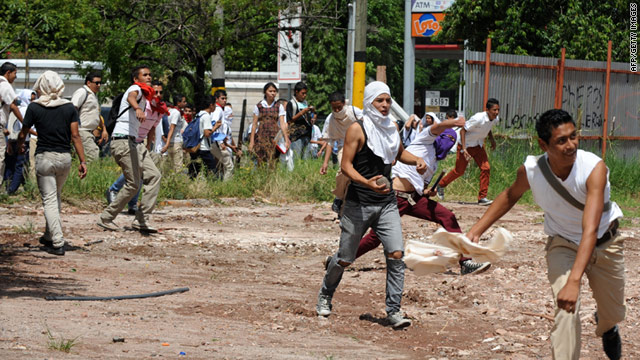 Students confront soldiers in a protest in Tegucigalpa on Tuesday. Soldiers also are trying to stop clashes in northern Honduras.
STORY HIGHLIGHTS

"Arms will be taken away immediately from people who carry weapons of war and weapons without permits," Security Secretary Oscar Alvarez said in a statement Monday.

The deployment comes after at least 11 people were killed in the Aguan region of Colon state -- six on Monday and five on Sunday, police said.

The region in northern Honduras is the site of longstanding disputes over palm plantations between local peasants and corporate landowners.

At least 600 police and troops will be deployed in the operation, aimed at "reinforcing operations to stop more disturbances and confrontations between peasants and private security groups," the Honduran government said in a statement.

A national land reform organization said local peasant groups should not be blamed for the attacks.

"What is happening at this moment has nothing to do with these organizations ... It is the result of individuals who have committed criminal acts and must be held accountable and punished," said Marco Ramiro Lobo, legal advisor to the National Agrarian Institute.

Miguel Angel Bonilla, the Honduran minister of communications and strategy, told CNN en Español that criminals were striking at a key time, just as government-mediated negotiations between peasants and landowners in the area were nearing their conclusion. Attackers dress like peasants but were heavily armed, he said, carrying high-caliber weapons.

"Effectively there are people who are taking advantage of the situation," he said. "They want it to look like they are peasants."

Land disputes over palm plantations in the area began more than a decade ago, but authorities have noted an uptick in violence in recent months.

Police data indicates that more than 50 people have been killed in land disputes in Colon in the past 14 months.