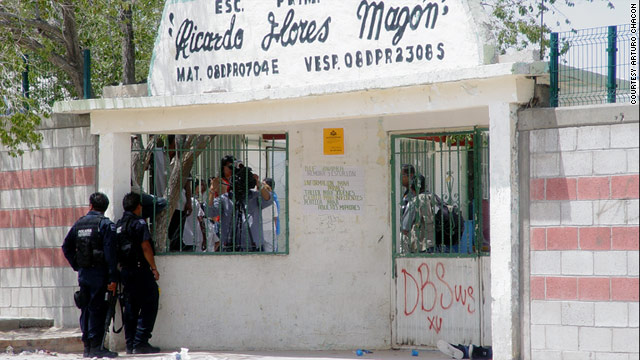 Police stand outside an elementary school in Mexico, where unknown gunman open fired on a crowd.
STORY HIGHLIGHTS
RELATED TOPICS

(CNN) -- Unknown gunmen fired into a crowd of people outside an elementary school in Ciudad Juarez, Mexico, Wednesday afternoon, killing one person and injuring four others, a Juarez municipal police spokesman said.

"A group of unknown gunmen were chasing down a target who ran to the Ricardo Flores Magon elementary school. He was with another woman, and they were being chased. The gunmen caught up to them outside of the school and fired into the crowd without caring about the people there," municipal police spokesman Adrian Sanchez said.

School was in session at the time of the shooting at 2 p.m. local time (3 p.m. ET), but none of the children were injured, Sanchez said. The students at the school are in the 10-to-11-year-old range, he said. It was their first week of classes.

Journalists at the scene reported children witnessed the shooting. Teachers at the school did not want to talk to reporters, saying they were still in shock.

Three women and one man were injured, including the woman who was accompanying the man targeted, Sanchez said. The women who were shot were waiting for their children outside of the school.

There was no indication any of the victims were involved or connected to drug trafficking, but that was part of the municipal police investigation, Sanchez said.

The suspects are still on the loose. The gunmen were seen traveling in a Volkswagen Jetta carrying AK-47s, witnesses to the incident told CNN. Drug traffickers in Mexico have a reputation for prefering AK-47s.

Earlier this week, the Chihuahua state government said that 225 women have been murdered in Juarez this year.

Ciudad Juarez is across the border from El Paso, Texas, and has been the scene of some of Mexico's worst violence in recent years.