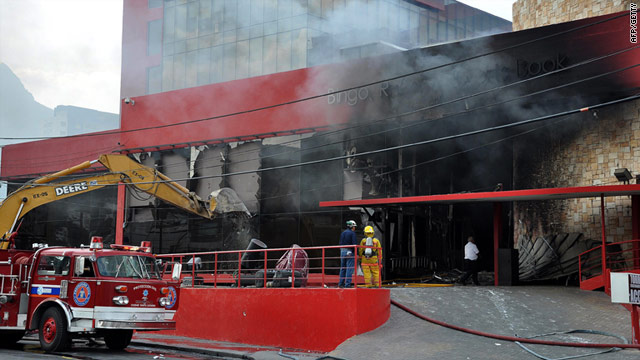 Thick smoke billows from the Casino Royale as firefighters attack the fire, in Monterrey, Mexico on August 25.
STORY HIGHLIGHTS

The announcement of the arrest of Nuevo Leon state police officer Miguel Angel Barraza Escamilla brings to the forefront the issue of police corruption. Police corruption is one of the biggest obstacles the country faces in its fight against the cartels. It is not uncommon for local and state police departments to occasionally purge officers believed to be working with drug cartels.

Barraza is alleged to have been an occupant of one of the vehicles that stopped and waited in front of the Casino Royale while it was being attacked, said Jose Cuitlahuac Salinas of the federal prosecutor's office.

Surveillance video footage of the entrance to the casino shows a gray Nissan Xterra that comes to a stop in a center lane and waits for 19 seconds before taking off, Cuitlahuac said.

Authorities had arrested five suspects already, and they said the appearance of the Xterra and other vehicles led them to believe that others were involved.

Investigators identified Barraza as one of the occupants of the vehicle, Cuitlahuac said. He was arrested Thursday and was taken before federal investigators for interrogation.

The five suspects arrested earlier were identified as members of the Zetas drug cartel. The men told investigators they carried out the attack because the owners of the casino had not complied with their extortion demands.

The fire they set inside the casino spread quickly, leading to one of the deadliest cartel attacks since the start of Mexico's offensive against the cartels.

In a separate action Thursday, state authorities detained the brother of Monterrey's mayor for 30 days while they investigate a video obtained by a newspaper that shows him accepting money from the owners of another casino.

The video stirred controversy in Monterrey in light of the casino fire, but the mayor's brother, Manuel Jonas Larrazabal, has said that the payments were not acts of corruption. The money was for cheese and other products that he had sold to the casino, his attorney said.