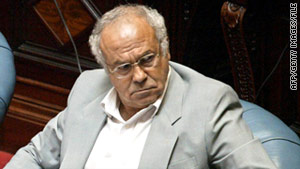 (CNN) -- An 18-year-old Haitian man allegedly assaulted by troops serving as U.N. peacekeepers in the Caribbean nation is traumatized and receiving medical care, according to a spokesman for Haitian President Michel Martelly.

The alleged assault came to light in recent days with a cell-phone video being circulated in Haiti, and a confirmation from the Uruguayan Ministry of Defense that it was investigating its troops in connection with the video.

The investigation has expanded to include a United Nations inquiry, as the Uruguayan navy troops allegedly involved were in Haiti as part of the U.N. peacekeeping mission.

Haitian officials are cooperating with U.N. and Uruguayan investigations into the alleged incident, and the situation has not harmed relations between Haiti and Uruguay, Herold Israel, communications director for Martelly, told CNN Monday night in a brief telephone interview. He did not elaborate on the alleged victim's condition or what care the man was receiving.

Israel said authorities were not sure whether the 18-year-old alleged victim was sexually abused, but investigations are ongoing.

The one-minute video, obtained by CNN, shows a young man with his shorts down being subdued by several men in military uniforms. The alleged victim is on a mattress, facing down, while several men hold his arms and hands behind his back. The uniformed men speak Spanish, but it is garbled on the tape and not understandable.

At the beginning of the video the alleged victim is slapped in the face. He screams several times while the alleged perpetrators laugh. The laughter grows louder as a seemingly naked man approaches the alleged victim from behind. The young man is subsequently released and the video ends. The video obtained by CNN does not show a sex act.

Leonardo Galante, a spokesman with the Uruguayan defense ministry, confirmed to CNN Sunday that top Uruguayan military officials had already received two internal reports regarding the incident and are waiting for results of an investigation launched by the U.N.

U.N spokeswoman Soung Choi told CNN Sunday that "the U.N. is investigating the matter," but would not elaborate on preliminary results or actions to be taken by the international organization.

The Uruguayan defense ministry said in a statement: "Immediately after the existence of the video became known, the armed forces ordered an urgent investigation. ... The National Defense Ministry has relieved of his duties the chief of the Naval Contingent and began the repatriation of the (armed forces) members from Haiti."

Galante confirmed that Uruguayan Defense Minister Eleuterio Fernandez Huidobro has recalled to Uruguay the navy commander in charge of the troops being investigated.

It was not clear Monday whether the Uruguayan troops being investigated were still in Haiti or had been taken back to Uruguay.

The statement did not give a date for the alleged incident or further identify the alleged victim, but some news reports have said the incident occurred in July.