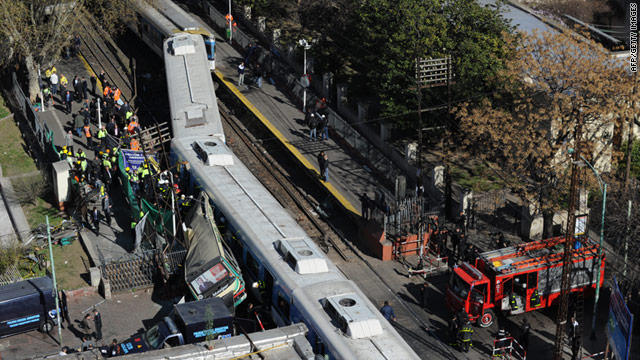 At least 228 people were injured in the accident, the state-run Telam news agency reported.

It took hours to free the remaining victims from the wreck, authorities said.

The first train rammed into a bus at a street-level train crossing, causing the train to derail. It was struck by a second train on the opposite track, police said.

"There are people in the hospital now in a very grave state, including children. They have severe injuries," said Fernando Sostre, spokesman for the Argentine Federal Police.

The crash happened at 6:15 a.m. in the Flores district of Buenos Aires.

Outside hospitals, family members of injured survivors mingled with those searching for signs that their loved ones had survived.

"I do not know where my daughter is. I can't find her," said Dario Arias. "I go to the hospitals and they don't even let me enter the door ... I went to the morgue and she's not there."

The cause of the collision was being investigated.

"The railroad crossing bar was working fine," said Juan Pablo Schiavi, Argentina's transportation secretary. Officials will review video from the trains in their investigation, he said.

But nearby surveillance footage, broadcast by several local media outlets, shows the crossing bar up at a 45-degree angle as the train strikes the bus, forcing a sharp turn as it yanked it along for several feet.

CNN's Javier Doberti and Brian Byrnes contributed to this report.