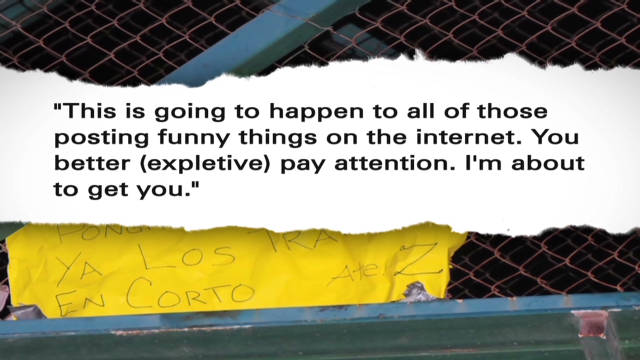 As violence grows across Mexico, online posts dealing with it have also surged at an explosive rate.

This week attackers left ominous threats mentioning two websites on signs beside mutilated bodies in northern Mexico. The message was clear: Post something we don't like online, and you're next. "I am about to get you," one sign said.

More than two days later, it was unclear who the two brutally slain victims left dangling from a bridge were, or whether they had any connection to social media.

Local police in Nuevo Laredo, Mexico, didn't answer the phone. State prosecutors said federal authorities were handling the matter. The Mexican Attorney General's Office said it had not received any details about the killings from local officials.

But no matter what investigators uncover, analysts say the case shows the prominent role technology has come to play in describing and denouncing violence in Mexico.

"It's still very telling," said Andres Monroy-Hernandez, a fellow at Harvard's Berkman Center for Internet and Society. "Regardless of why they killed these people, the cartels kind of went out of their way and wrote a message explicitly calling out what is being reported on the Internet."

'The truth has to be told'

A woman was hogtied and disemboweled. Attackers left her topless, dangling by her feet and hands from a bridge in the border city of Nuevo Laredo earlier this week. A bloodied man next to her was hanging by his hands, his right shoulder severed so deeply the bone was visible.

Signs left near the bodies declared the pair, both apparently in their 20s, were killed for posting denouncements of drug cartel activities on a social network.

"This is going to happen to all of those posting funny things on the Internet," one sign said. "You better (expletive) pay attention."

The Nuevo Laredo case "shows that online messages are worrying a lot of people," said Raul Trejo Delarbre, who studies social media at the National Autonomous University of Mexico. "It shows that uncomfortable topics are being addressed there."

Online posts have become some of the loudest voices reporting violence in Mexico. In some parts of the country, threats from cartels have silenced traditional media. Sometimes even local authorities fear speaking out.

Over the past year, Twitter users in the northern industrial city of Monterrey posted balacera -- the Spanish word for shootout -- more frequently than anyone elsewhere in the world, Monroy-Hernandez said.

"There are frequently comments about fear, the feeling of distress," Trejo said.

But there's a flip side. Last month, false rumors about school attacks in Veracruz, Mexico, spread rapidly on Twitter and Facebook, causing real-life chaos on the coastal city's streets. Parents panicked, rushing to rescue their children from schools they feared were under attack. Traffic jammed and cars crashed.

Rumors swirled online this week, as word spread about the slayings in the border city of Nuevo Laredo. Some users posted fears in online forums, vowing to delete their accounts or post anonymously. Others claimed the crime scene had been altered to add the social media threat.

"When I first saw the photo of the scene, I was scared. But I've calmed down. And now I've made some changes, but this is not going to compromise what I'm doing, or what others like me are doing," said one Twitter user in northern Mexico who frequently posts about drug violence.

The Twitter user spoke to CNN but asked to remain anonymous to protect his family. He said he has removed any personal information about himself from his online profile, stopped showing his face in his profile picture and made sure not to tweet anything about his family or his job.

An anonymous voice chronicles the violence

The signs left beside bodies this week threatened those who report violent incidents through social media networks. But the two websites it mentioned, Al Rojo Vivo and Blog del Narco, also showed no signs of stopping their efforts.

On the Al Rojo Vivo forum, where citizens can make anonymous tips, one person posted: "Don't be afraid to denounce. It's very difficult for them to find out who denounced. They only want to scare society."

Since its launch last year, the drug-violence blog has gained notoriety for posting shocking videos and pictures, many of them submitted to the site anonymously.

The identity of the person behind the site also remains unknown. Last year the site's creator said he was a twenty-something college student from northern Mexico majoring in computer science.

In a statement sent to CNN Wednesday, Blog del Narco said its site was not dedicated to denouncing crime.

'We don't want to find out who's responsible'

Their goal is finding the names of the deceased in every violent death in Mexico, and posting them online for the world to see.

"We want to give them names, faces. To stop trivializing death," the website says.

That's a difficult task amid a nationwide drug war that has claimed tens of thousands of casualties since Mexican President Felipe Calderon began a crackdown on cartels in December 2006. As of Wednesday, the website said it had documented 15,372 deaths caused by violence in Mexico since last September.

Alicia Gonzalez, a translator who runs the website, said Thursday that this week's killings in Nuevo Laredo did not diminish her resolve.

"I have nothing to do with the causes of violent acts. Really I have no desire to get involved in those things. I am always very clear. We don't want to find out who's responsible," she said. "What worries us is what will happen with all these children who are left as orphans."