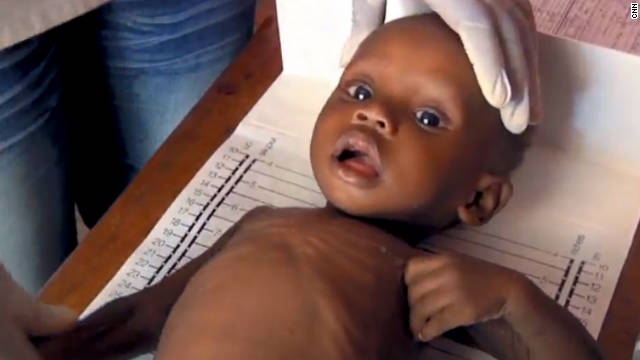 (CNN) -- With his ribs showing and his skin practically hanging off him, Pierre Wisny is painfully thin.

The 11-month-old Haitian weighs just 11 pounds, and it's no surprise that he is severely malnourished.

The same applies for 3-year-old Alcincord Guerviscon, although it's clear -- even without measurements -- to see that his growth has been stunted by the same condition. He weighs only 15 pounds.

In most of these cases, the children got this way because of poverty and a lack of access to good food. If they're not given emergency treatment, they could die or suffer more effects of malnutrition, including reduced brain development.

For staff members at one clinic in northern Haiti, intervention comes in bright green packets: Medika Mamba, which means "peanut butter medicine" in Creole. It's a ready-to-eat paste packed with nutritious ingredients that -- over a period of weeks -- gives a jolt to the system and puts children back on track. Made by a U.S.-based nonprofit called Meds and Food for Kids, it's one of several brands of ready-to-use therapeutic foods. 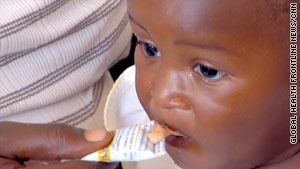 A Haitian child is given Nutributter, a supplementary food rich in nutrients.

"You can't rehabilitate a child who has severe malnutrition with a plate of beans and rice. There's just no way," said Thomas Stehl, the nonprofit's director of operations. "Their stomachs are too small and their nutritional requirements are too great to ever be satisfied in that way. So the quality and the density of food is really important. And that is why ready-to-use therapeutic food and Medika Mamba is such a great answer."

At another clinic, where children have been on therapeutic food for several weeks, the difference is striking.

When Guerline d'Haiti arrived at the clinic, she weighed 10 pounds. Three weeks later, she had gained 2 pounds and become much more active.

"If you have children that can't eat, really eat, that child won't survive," she said. "But with the Mamba medication specially made for little children -- if that child starts taking the Mamba normally and regularly, the child will recuperate and start eating again."

Haiti has long been one of the poorest countries in the world, with many of its people living on less than $2 a day.

But the poverty got even worse in 2010, when a massive earthquake struck in January, killing 316,000 people and displacing more than 2 million. As of July 2011, nearly 600,000 Haitians were still displaced, according to the International Organization of Migration.

"When the earthquake came ... it became harder for the kids," said Patrice Millet, one of the top 10 CNN Heroes of 2011. "Now, most of them live in tents. ... They have to fight for everything."

Through his nonprofit program, Millet has helped hundreds of children from Haiti's poorest slums, teaching them soccer and valuable life skills. But about once a week, he also gives them food to take home to their families.

Even with Medika Mamba and other emergency foods out there, Millet and many others know that the best course of action is to prevent malnutrition in the first place.

At Fort St. Michel Health Center in Cap-Haitien, Haiti, 350 at-risk children are enrolled in a study of a supplementary food known as Nutributter. Nutributter contains fewer calories than Medika Mamba and is designed to be taken with regular food, essentially "topping up" nutrients that are lacking in the child's diet.

But there are critics of this type of intervention.

Marcos Arana-Cedeno, a consultant who studied malnutrition in Chiapas, Mexico, says fortified foods can do more harm than good.

"They are promoting dependence," he said.

Arana-Cedeno is concerned that countries will simply distribute therapeutic foods instead of educating the public about malnutrition, something that "requires more energy and more effort."

But Meds and Food for Kids says its program does take the long-term interests of the community into account. Rather than simply importing Medika Mamba, the organization makes the product in Haiti and works with local farmers, buying their peanuts and teaching them how to improve their yields.

"The evolution of their thinking about business, about expanding their peanut production, about how that translates to other things, is really striking," said Jamie Rhoads, the group's agricultural development specialist. "They're organizing around the prospect of being able to sell us peanuts."

"We can say, 'Yes, we've improved,' " said Plovert Petit-Frere, president of a farmers cooperative in Haiti. "Especially in weighing the crop, because we've been able to conserve more of it that will last longer."

Meds and Food for Kids says it plans to buy many more peanuts in the coming years to produce a new version of its product: Plumpy'nut Medika Mamba. It follows a deal with Nutriset, the world's leading producer of ready-to-eat therapeutic food.

The new paste will use Nutriset's recipe, which meets the requirements of major agencies such as the World Food Programme and UNICEF. Each serving must come in an individual 500-calorie pack and have a shelf life of two years.

Meds and Food for Kids also is planning a new factory in Haiti that it says will create at least 50 jobs. And once aid agencies approve local crops to be used as the food's main ingredient, the group says, it will use nearly 1,000 peanut farmers as suppliers.

"It is about children, of course," Stehl said. "But it is more than that. (This) has the opportunity to actually catalyze economic and agricultural development in a country where it's needed."

This story was produced by Global Health Frontline News. For more stories like this, go to www.ghfn.org.