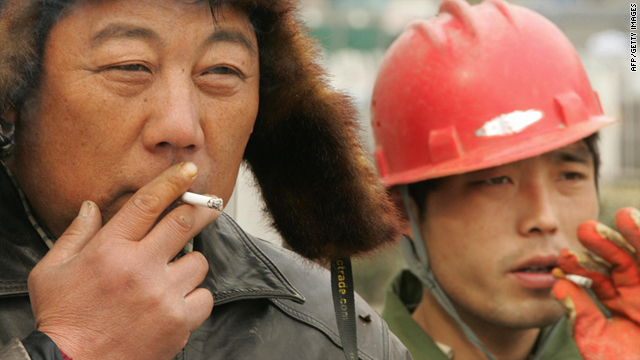 Two men smoke cigarettes on a street in Beijing. Over 300 million people in China are regular smokers, most of them men.
STORY HIGHLIGHTS
RELATED TOPICS

Beijing (CNN) -- When I first came to China 39 years ago, airlines distributed cigarettes free of charge during flights. Hotel rooms were invariably furnished with free packs of cigarettes. At meetings and conferences, filter-tipped cigarettes were standard features on the podium alongside writing pads, pencils and ashtrays. Non-smoking cars were unheard of on trains.

Today, smoking remains a stubborn habit because it is an integral part of Chinese social life. Offering a cigarette is a common way to greet someone, a handy ice-breaker especially in awkward situations (I myself used to do that until I quit smoking 30 years ago).

More than 300 million people in China are regular smokers, most of them men, according to the Global Adult Tobacco Survey conducted in 2009-2010. Increasingly, large numbers of women and teenagers have also taken up the habit.

The survey, jointly conducted by the China Center for Disease Control, the U.S. Centers for Disease Control and Prevention and the World Health Organization, shows that seven out of 10 adults reported being exposed to secondhand smoke in a typical week.

Smoking is estimated to kill more than one million Chinese a year. They die from chronic respiratory ailments like tuberculosis and emphysema, and from cancers affecting the lungs, mouth, liver and stomach.

Another report by Chinese and international experts led by China CDC deputy director Yang Gonghuan and Tsinghua professor Hu Angang projects that the deaths attributable to tobacco in China will rise to 3.5 million per year by 2030.

"That is an astounding number given that we know how to prevent tobacco-attributable death and disease," says Dr. Sarah England, the World Health Organization's (WHO) Tobacco Free Initiative Officer in China.

Campaigning against tobacco use has always been an uphill battle.

A smoke after a meal is still customary, as indicated in the popular saying, "a smoke after dinner is better than life after death." Cigarettes are favored gifts to get things done or expedited.

Chain-smoking national leaders may have given smoking undeserved respectability. Chairman Mao was a heavy smoker, though he died at age 82. Deng Xiaoping, who preferred Panda cigarettes, died at 92.

Because many Chinese celebrities -- artists and athletes -- smoke in public, some Chinese associate wealth and sophistication with puffing a cigarette.

Tobacco is big business in China. Companies produce and sell more than 400 cigarette brands in the country, ranging from the high-end Zhonghua and Double Happiness to cheaper brands like Little Panda and Yellow Pagoda.

The tobacco industry has been so profitable it was able to pay the government $75.13 billion in taxes in 2009, said Zhang Xiulian, spokesman of the State Tobacco Monopoly Bureau.

Unlike some other countries, China does not require cigarette packaging to carry any warning about health hazards. "The tobacco industry's obstruction is the fundamental cause of ineffective tobacco control," says the report coauthored by Yang and Hu.

In recent years, the Chinese government has banned tobacco companies from public advertising and from sponsoring sports and cultural events. It has also launched education campaigns in schools and in local media.

"There is still a huge gap between the existing domestic laws and regulations and the FCTC's requirements, and the implementation and enforcement of existing laws are poor and ineffective," says the report by Yang and Hu.

The Chinese government has recently decreed a ban on smoking in all public places, workplaces and on public transportation.

"The government has not taken enough measures to restrict smoking in public areas. It is not just a question of weak regulations but also weak implementation," says a statement from the federation, a quasi-government group that lobbies for women's rights and has 40 million members.

In fact, the ban on smoking in restaurants, pubs, coffee shops and karaoke bars has largely been ignored. The government is said to have deployed 100,000 inspectors nationwide to enforce the ban, but the fines (about $1.40 per offense) are too low to make a difference.

"I come home from bars smelling like smoke," says Feliz Lopez, a non-smoking 20-year-old college student visiting from New York. "Restaurants and bars assume patrons smoke so there are ashtrays on tables, and there is no distinction between smoking and non-smoking sections."

Experts acknowledge it is hard to curb tobacco use. But England is certain China can do it.

"We have seen both developed and developing countries from New Zealand to Uruguay implement highly effective tobacco control plans, bring down the smoking rates and save lives," she says. "With political will, it is entirely feasible to stop the tobacco epidemic in China through interventions."