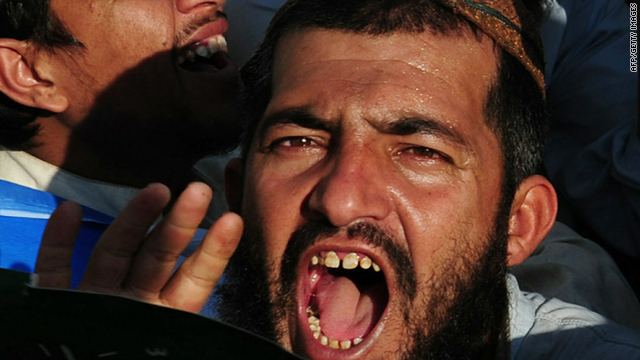 Pakistani Islamists shout slogans during a rally in Karachi Sunday against the amendment of the blasphemy laws.
STORY HIGHLIGHTS
RELATED TOPICS

(CNN) -- Thousands of people turned out in Karachi Sunday to show their support for Pakistan's current blasphemy laws and warn the government against changing the laws.

The rally, called by the leaders of several hard-line Islamic groups, closed main roads and markets throughout the city. Demonstrators demanded Pakistan leave its blasphemy laws untouched. They make it a crime punishable by death to insult Islam, the Quran or the Prophet Mohammed.

A number of banners at the rally stated support for Muhammad Mumtaz Qadri, accused of shooting the governor of Punjab province earlier this month. Qadri was a bodyguard for Gov. Salman Taseer, a liberal lawmaker who spoke out against the blasphemy laws. Qadri told police he assassinated Taseer because "he did blasphemy of the Prophet Mohammed."

A bill is now before the Pakistani parliament that would change the current blasphemy laws. It calls for a tighter definition of the term to avoid cases like that of Asia Bibi, a Christian woman who was sentenced to death under the law. A court found the 45-year-old woman guilty of defiling the name of the Prophet Mohammed during a 2009 argument with fellow Muslim field workers.

CNN's Aliza Kassim and Nasir Habib contributed to this report