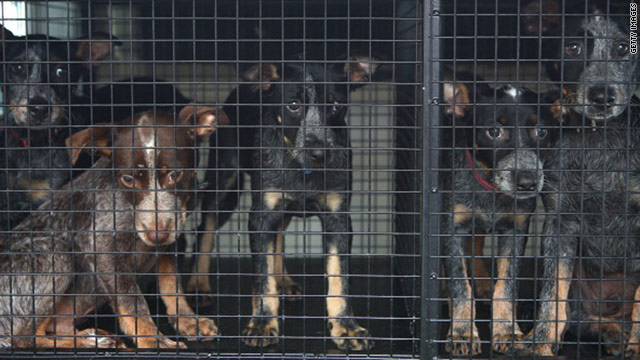 Puppies look out of a van as they are evacuated from the RSPCA shelter at Fairfield in Brisbane on January 12.
STORY HIGHLIGHTS

Are you there? Share your stories, photos and videos with CNN

(CNN) -- More than 500 animals -- including sheep, ducks, goats, a peacock, horses, dogs and cats -- were evacuated Wednesday from Queensland's largest animal shelter due to rising floodwaters from the Brisbane River, an official said.

A Queensland animal protection group put out an emergency SOS to the community to take the animals into emergency foster care after the five-acre center in Brisbane was inundated -- with some buildings completely underwater -- and equipment destroyed.

"The water is still rising," said Michael Pecic, local chief inspector for the Royal Society for the Prevention of Cruelty to Animals. Some of the animals had water up to their stomachs. "We were just trying to move in front of the wall of water as it rose."

Pecic said hundreds of people in the community responded to their call for help, and the animals were transported to temporary homes in animal ambulances, dog trailers and cars.

The floodwaters have taken a toll on the animals, and the RSPCA had to set up triage areas for animals with various responses to the disaster.

Most animals responded like humans did, "very cooperative," while others became aggressive or emotionally shutdown. Difficult animals were either tended to one-on-one by a volunteer or put in crates and covered with blankets, Pecic said.

It could be a few weeks before the center re-opens. Floodwaters have isolated another two RSPCA shelters in Queensland, where staff received provisions via helicopters.

The organization also has set up several evacuation emergency areas for owners to go with their pets. RSPCA has four teams on standby to search for stranded livestock or wildlife in areas deluged by walls of water earlier this week, but Pecic said he feared they had lost a "large amount of animals."