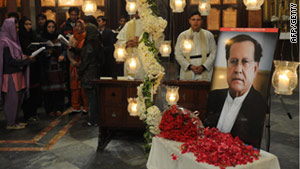 Salman Taseer, who opposed Pakistan's hardline blasphemy laws, was shot dead by one of his own security guards.
STORY HIGHLIGHTS
RELATED TOPICS

Qadri was serving as one of Taseer's security guards when he fired more than 20 bullets at his boss in broad daylight outside an upscale Islamabad shopping plaza.

In his statement, Qadri credited Sunni clerics Mufti Haneef Qureshi and Imtiaz Shah for motivating him to kill Taseer after the politician spoke out against Pakistan's controversial blasphemy laws, police said.

Taseer said the woman was innocent. He said the laws should be changed because they were being used to persecute Pakistan's religious minorities. Hard-line religious groups in Pakistan protested against Taseer and warned the government not to tamper with the blasphemy laws.

Any change to the laws would be an affront to Islam and the Prophet Mohammed, they said. Some of those religious groups praised Qadri for killing Taseer, called for his release and showered him with rose petals at his first court appearance.

The clerics wanted in connection with Taseer's killing are based out of the gunman's hometown of Rawalpindi, the garrison city just outside of the federal capital, but is not clear when and where they spoke to Qadri or what they told him.

Yamin said there is more evidence linking the clerics to the assassination but he wouldn't reveal what police have found. He said the clerics appear to be on the run.

As for the blasphemy laws, there has been debate raging about the legitimacy of the measure and whether they should be changed, The government's position is that there's not going to be an effort to amend the laws, but individual parliamentarians have proposed changes.