By Iqbal Athas, For CNN 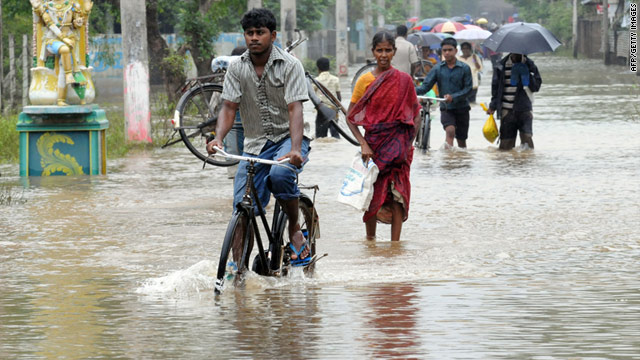 U.S. ambassador to the country, Patricia A. Butenis, said in a statement that Washington was donating U.S. $300,000 to provide various goods and services to areas hardest-hit by the floods.

She said the funds have provided boats to local government in the eastern district of Batticaloa.

"We are helping the government to identify families in need and make an accurate assessment of the situation," she said.

Another shipment will arrive on Monday, an Indian high commission official said.

The Sri Lanka government has about $1.3 million of assistance funds so far for the flood victims.

Though the rains have diminished or receded in most areas, disaster center officials in Colombo warned that the dangers were not yet over.

The Sri Lanka branch of the United Nations Office for the Co-ordination of Humanitarian Affairs (OCHA) said that floods and receding waters may unearth mines and explosive remnants of war (ERW) " and carry explosives from contaminated areas into areas thought to be safe."

Mine officials and local authorities have urged vigilance from residents and people working in affected areas.

The army has also sent out instructions to their installations in affected areas to warn the public, Maj. Gen. Udaya Madawala said.

The mines are remnants of a war between Sri Lankan security forces and the Tamil Tiger rebels. Sri Lankan troops defeated the rebels in May 2009.

The OCHA report said that the worst affected districts were Ampara, Batticaloa and Trincomalee in the eastern province.

Initial estimates indicate that more than 250,000 acres of crop land and 200,000 acres of paddy have been severely damaged. OCHA warned that prices of rice and other commodities may increase as one of the most productive paddy areas of the country have been affected.

The number of camps for displaced people has gone up to 600 camp, according to disaster officials.