51 dead from flooding in the Philippines; 1.6 million affected 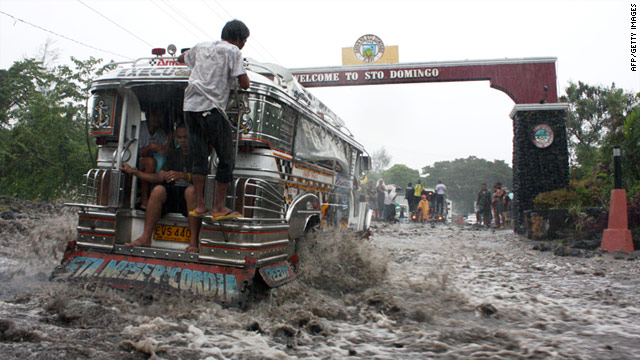 A passenger jeepney traverses a flooded road in the town of Sto. Domingo, southeast of Manila on December 30, 2010.
STORY HIGHLIGHTS
RELATED TOPICS

(CNN) -- Some 51 people are dead in the Philippines after weeks of intense rain caused severe flooding across the Asian nation, the country's national disaster agency said early Monday.

Rains continued to linger over much of the the island of Luzon, with land around the Visayan Sea and the eastern island of Mindanao also experiencing significant precipitation, the National Disaster Risk Reduction and Management Council said in a statement.

Those killed, ranging from ages 1 to 80, died from drowning, landslides or electrocution, according to the disaster agency.

Twelve people are still missing, while another eight were hurt -- all in landslides in southern Leyte province.

The crisis began weeks ago, on December 29, when a monsoon over northern and central Luzon met a cold front in southern Luzon, Visayas and Mindanao. The result was severe flooding and landslides in 25 provinces.

The storms have affected nearly 1.6 million people from more than 300,000 families, according to the disaster agency.

Some of the worst conditions have been in Caraga, on Mindanao island, where more than 600,000 people have been impacted and 20 killed. Leyte and Samar also have been hard hit, with about 530,000 people in that region affected.

The monsoon has wreaked havoc on structures and infrastructure as well. More than 500 homes have been destroyed, and just under 2,000 partially damaged. The disaster agency estimated that, in total, the storms caused 417,715,140 Philippine pesos' ($9.5 million U.S.) worth in damage to agriculture, infrastructure and private properties.

December and January are traditionally part of the Philippines' dry season, with heavy rains more common in the islands from May to October during the summer monsoon.