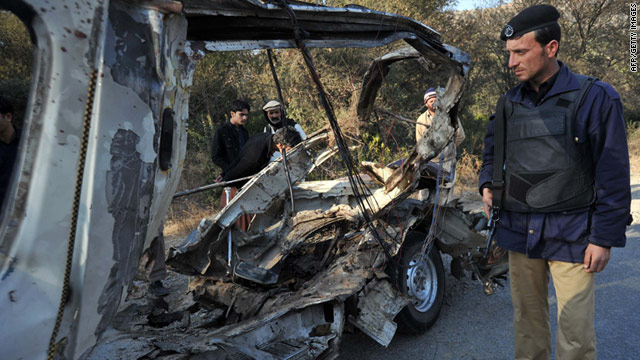 A Pakistani policeman stands near the wreckage of a passenger van after a bomb blast in Jawarza, near Hangu.
STORY HIGHLIGHTS
RELATED TOPICS

Around 10 kilograms (22 pounds) of explosives were planted inside the van, police official Islam Ud-Din said. He said an earlier police report indicating that the explosion was caused by a head-on crash between two passenger vans was inaccurate.

Earlier Monday, police said 11 people were injured in the blast.

It was not immediately clear why the passenger van was targeted, but the district of Hangu sits in a region plagued by sectarian violence between Sunnis and Shias.

Last March, a suicide bomber attacked a convoy of vehicles carrying Shia passengers in Hangu, and a suicide car bomb rammed into a Shia hospital there in December.