Some sharks may be colorblind, researchers say 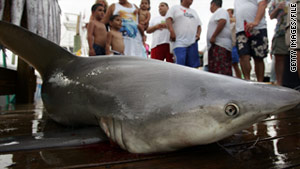 The Australian study devoted attention to the bull shark, an aggressive species responsible for many attacks on humans.
STORY HIGHLIGHTS
RELATED TOPICS

(CNN) -- Some sharks may be unable to differentiate color, according to the University of Western Australia, where scientists have been conducting research on the topic in tandem with Australia's University of Queensland.

Researchers, using a procedure called micro-spectrophotometry, measured the eyes of some species of sharks found in Australian waters, and they determined that the sharks' retinas contain only one type of cone photoreceptor, which measures color vision by reviewing light at specific wavelengths.

"Humans have three cone types that are sensitive to blue, green and red light," the lead author of the study, associate professor Nathan Hart, said in a university news release. "By comparing signals from the different cone types we get the sensation of color vision."

The study is part of a project meant to explore ways to limit shark attacks by equipping swimmers with special attire, the release said. It also could reduce the likelihood that sharks become ensnared in commercial fishing lines.

"Our study shows that contrast against the background, rather than color per se, may be more important for object detection by sharks," Hart said. "This may help us to design long-line fishing lures that are less attractive to sharks."

The study devoted specific attention to the bull shark, a particularly aggressive species that commonly inhabits shallow, murky waters and is responsible for numerous attacks on humans, the university said.

"Most shark attacks are thought to be the result of curiosity on the part of a shark that has been attracted to an unusual stimulus, rather than some premeditated ambush," Hart said.