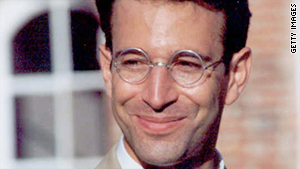 (CNN) -- Federal agents have backed up al Qaeda captive Khalid Sheikh Mohammed's confession in the killing of journalist Daniel Pearl by using photographs of the veins in his hands, according to a new report released Thursday.

Mohammed confessed to beheading Pearl after his 2003 arrest in Pakistan. But the U.S. admission that he had been subjected to "waterboarding" -- a practice historically treated as torture -- while in CIA custody cast doubt on the reliability of his confession, according to a lengthy investigation of the Pearl case by the Center for Public Integrity.

According to the report, the FBI and CIA used stills from the video of Pearl's killing to match the patterns of the veins in Mohammed's hand in 2004 and repeated the process in 2007, after Mohammed repeated his confession during a hearing at the U.S. prison camp at Guantanamo Bay, Cuba.

"Beyond KSM's confession, the U.S. government has never revealed any corroborating evidence," the report states. But it called the vein match the "best evidence" the United States has linking Mohammed to Pearl's 2002 slaying.

The FBI had no comment on the report that it used vein-matching technology to confirm Mohammed's identity, and said in a written statement that it is not using the technology "at this time."

Mohammed is accused of planning al Qaeda's September 11, 2001, attacks on New York and Washington. According to military prosecutors, he admitted responsibility for the attacks "from A to Z" during a hearing before a military court at Guantanamo Bay.

He has not been charged in Pearl's death, however. According to the report, U.S. officials decided against bringing charges in the Pearl case to avoid complicating Mohammed's prosecution for the 9/11 attacks.

Pearl was kidnapped in the Pakistani city of Karachi while on his way to what he believed was an interview with a radical cleric connected to al Qaeda operative Richard Reid's "shoe bomb" plot. A video of Pearl's beheading was distributed online nearly a month after he was abducted, but the face of the killer who slit his throat was not visible.

According to Thursday's report, his captors were "inept, plagued by bungling plans, a failure to cover their tracks, and an inability to operate cameras and computer equipment." Even the grisly video of Pearl's death had to be restaged, "because the cameraman failed to capture the original scene."

Mohammed moved so quickly to cut Pearl's throat that the photographer failed to load a tape into his camera, according to the report. He repeated the killing for the camera, severing Pearl's head in the process and making sure the photographer showed the blood still pouring through Pearl's throat. The scene "would later turn the stomachs of even the most hardened Pakistani and U.S. investigators," the report states.

But the report is also critical of Pakistani authorities' pursuit of the killers. Prosecutors "knowingly used perjured testimony" against the four men who were convicted in Pearl's death, it states.

"While the four were involved in the kidnapping plan and certainly were culpable, they were not present when Pearl was murdered. Others, who were present and actually assisted in the brutal beheading, were not charged," the report states. And 14 people suspected of working as guards, "fixers" or drivers in the abduction remain free, the report states.

At least five others suspected of involvement have been killed or died under suspicious circumstances, according to the report. Mohammed and one of his nephews remain in U.S. custody, another man is being held in Pakistan on unrelated charges and another of Mohammed's nephews is believed to be in custody, "but his whereabouts cannot be confirmed."

Mohammed told the FBI that a senior al Qaeda operative advised him to take control of Pearl from his original kidnappers, the report said. Pakistani authorities freed a guard who was a key informant and failed to follow potential leads, according to the report.

The three-year Pearl Project was prepared by faculty and students at Georgetown University in Washington.