Bin Laden message warns France to pull out of Afghanistan 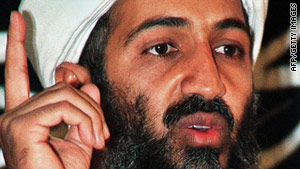 An audio tape purportedly from Osama bin Laden, shown in an undated photo, warned France to pull out of Afghanistan.
STORY HIGHLIGHTS

"We repeat the same message to you," said the speaker in an audiotape played on the Al-Jazeera satellite news network. "The release of your prisoners from the hands of our brethren depends on the withdrawal of your soldiers from our countries."

One U.S. counterterrorism official told CNN that the tape "sends a chill up your spine," as it refers to "a couple of human beings whose lives are at stake."

However, the official said it is unclear how much influence bin Laden might have over the fate of the hostages.

Another counterterrorism official said he would not discuss whether it was in fact bin Laden on the latest tape other than to say, "there has never been a recording that has been false" about its claim to be him.

On the tape, the speaker, believed to be al Qaeda chief bin Laden, warns the French government that its alliance with the United States will prove costly.

"The dismissal of your President (Nicholas) Sarkozy to get out of Afghanistan is the result of his subservience to the United States and this (dismissal) is considered to be the green signal to kill your prisoners without delay," the speaker said.

He goes on to say that "we will not do that at the time that suits him (Sarkozy) and this position will cost you dearly on all fronts, in France and abroad."

France, however, said the message would not deter it from its Afghanistan strategy.

"We are determined to stay in Afghanistan with our allies for the Afghan people," said French Foreign Ministry spokesman Bernard Valero.

The first U.S. counterterrorism official told CNN that bin Laden's continuing messages serve as a "reminder" and an "in your face" signal that he is still out there.

But, that official said, "the relevance (of the tapes) are on the wane. ... His message doesn't resonate as well."

The second U.S. official said the tape is an effort by bin Laden to prove "he is present, that he is engaging."

It's a "morale factor to remind the people who follow him that he's still out there," the second official said.

But this official said bin Laden's message is more "inspirational" than operational. Some could take his message as "a directive," but there is no indication he is "leading" an operation, the official said.

The official said there has been no change in the U.S. belief that bin Laden is hiding in Pakistan somewhere along the border with Afghanistan.

Taliban militants captured the journalists -- Herve Ghesquiere and Stephane Taponier from France 3 Television -- in December 2009 and threatened to kill them if their demands were not met, including the release of some detainees held by France.

Al Qaeda's North African wing has made the same withdrawal demands pertaining to the safety of five French nationals abducted in Niger.

CNN's Saad Abedine and Pam Benson contributed to this report.