By Adam Bray, Special for CNN 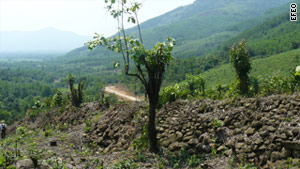 It's not on the same scale of China's Great Wall but is still significant for Vietnam's past and future.

Editor's note: Adam Bray has written extensively on Vietnam and is the first journalist to have visited the Long Wall.

Quang Ngai, Vietnam (CNN) -- Nestled in the mountain foothills of a remote province in central Vietnam, one of the country's most important archaeological discoveries in a century has recently come to light.

After five years of exploration and excavation, a team of archaeologists has uncovered a 127-kilometer (79-mile) wall -- which locals have called "Vietnam's Great Wall."

Professor Phan Huy Lê, president of the Vietnam Association of Historians, said: "This is the longest monument in Southeast Asia."

The wall is built of alternating sections of stone and earth, with some sections reaching a height of up to four meters.

In 2005, Dr. Andrew Hardy, associate professor and head of the Hanoi branch of École Française d'Extrême-Orient (French School of Asian Studies), found an odd reference to a "Long Wall of Quang Ngai" in an 1885 document compiled by the Nguyen Dynasty court entitled, "Descriptive Geography of the Emperor Dong Khanh."

It sparked his imagination and a major exploration and excavation project for a team led by Hardy and Dr. Nguyen Tien Dong, an archaeologist at the Institute of Archaeology (Vietnam Academy of Social Sciences). The wall was discovered after some five years of work.

It stretches from northern Quang Ngai Province south into the province of Binh Dinh and is arguably the greatest engineering feat of the Nguyen Dynasty.

Construction of the Long Wall started in 1819 under the direction of Le Van Duyet, a high-ranking mandarin serving Emperor Gia Long.

Despite the locals' nickname referencing the Great Wall of China, the Vietnam Wall is more like Hadrian's Wall -- a Roman-era wall on the border of England and Scotland.

Like Hadrian's Wall, the Quang Ngai wall was built along a pre-existing road. More than 50 ancient forts have been identified along its length, established to maintain security and levy taxes.

There is evidence to suggest that many of the forts, markets and temples built along the road are much older than the wall itself.

It served to demarcate territory and regulate trade and travel between the Viet in the plains and the Hrê tribes in the mountain valleys.

Research suggests it may have been built in cooperation between both the Viet and the Hrê.

According to experts, the wall's construction was in the interests of both communities, and inhabitants in both zones tell stories about how their respective ancestors built the wall to protect their territory from incursions by the other side.

An application for National Heritage status is now being processed with the ambition of turning the Long Wall into an international tourist attraction.

During a visit to Quang Ngai by international experts in 2010, Christopher Young, Head of International Advice at English Heritage, said: "The Long Wall presents an enormous opportunity for research, careful conservation and sustainable use."

Spread across the province, there are also sites of cultural interest, including vestiges of more than a dozen ancient Cham temples, citadels and Sa Huynh burial grounds dating as far back as 1000 BC.

Most notable among them is the well-preserved Chau Sa Citadel, built in the ninth century.

But the development of the wall for tourism is not without hurdles, given the history of the region.

Quang Ngai is the province where the infamous My Lai massacre occurred in 1968 when U.S. servicemen killed more than 300 apparently unarmed civilians.

Although a museum memorializing the tragedy was built in cooperation with U.S. specialists, the area has remained politically sensitive and under tight government control.

Until recently, the government has been reluctant to allow foreigners to visit some minority communities.

If the endeavor to develop the wall for tourism is successful, it will require the government to promote adventure trekking and cycling through previously isolated highland communities on an unprecedented scale.

That would open Vietnam up to a new kind of tourism -- historical ecotourism -- which goes beyond the Ministry of Tourism's preference for packaged tours in coastal beach resorts.

It may also create the greatest trek in Southeast Asia.