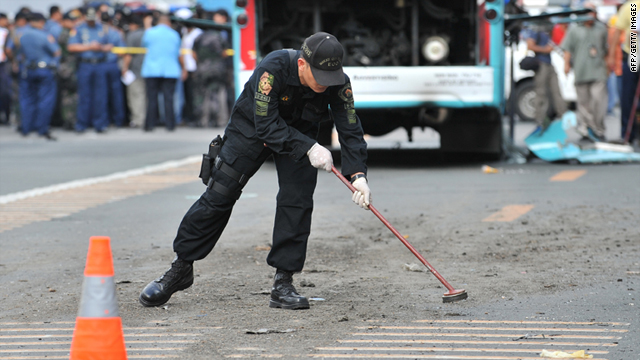 A Philippine police investigator looks for evidence next to a bus where a bomb exploded inside along the main avenue in the financial district of Manila on Tuesday.
STORY HIGHLIGHTS
RELATED TOPICS

Manila, Philippines (CNN) -- The death toll from a bus bombing in Manila's financial district climbed to five Wednesday as officials pointed to terror and crime groups in the country's south as a likely source of the attack.

The bus was approaching a metro rail station when it blew up. Thirteen people were injured in the attack, authorities said.

Gen. Raul Bacalso, the Philippine national police chief, said the terror angle is being looked at closely during testimony before a Senate inquiry Wednesday morning.

Evidence recovered from the crime scene and the pattern used in the bombing point to a strong possibility that terror or crime groups operating on the southern island of Mindanao may be responsible for the attack in Makati City, Manila's financial district, according to Nicanor Bartolome, a regional police director.

The head of the Police Investigation Task Force, Arne De Los Santos, identified the explosive device as an 81mm mortar, which he said was triggered by a cellphone. It was placed inside a bag that was left under a bus seat, according to Santos.

Mindanao is a predominantly Muslim autonomous region, which was set up in the 1990s to quell armed uprisings by people seeking an independent Muslim homeland in the Philippines, a predominantly Christian country.

Journalists Arlene Espirtu and Winona Cueva contributed to this report.