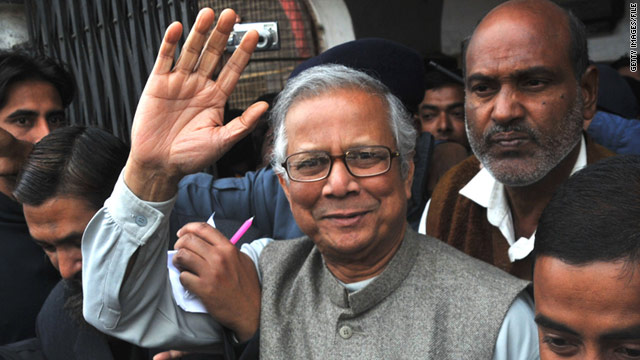 Nobel laureate Muhammad Yunus, widely known as "banker to the poor," outside of court on January 18.
STORY HIGHLIGHTS
RELATED TOPICS

The microfinance loan pioneer was released on bail in the case involving yogurt produced by a joint venture between French food giant Danone and Yunus' Grameen Bank.

Earlier this month, Yunus, widely known as "banker to the poor," landed in court outside Dhaka in a defamation case for a rant against politicians four years ago. The Bangladesh government is also looking into his bank.

Yunus pioneered the microcredit industry, allowing impoverished Bangladeshis to obtain small loans at favorable terms, nearly three decades ago. He won the Nobel Peace Prize in 2006 along with Grameen Bank, which opened in 1983. His microcredit model has been replicated in many parts of the world.

But in the past few weeks, Yunus can't catch a break.

"We've filed a case because our examination has found the yogurt is substandard and unsafe," Kamrul Hasan, a food inspector with the Dhaka City Corp., said Thursday.

"I appeared because I was asked by the court to do so," Yunus said after Thursday's hearing and continued, "I have been granted bail and exempted from personal appearance next time."

His lawyer said the claims were "false and baseless."

After a 15-minute hearing at the court in Mymensingh district, about 120 kilometers from the capital of Dhaka, Magistrate Rozina Khan granted Yunus a 5,000-taka (about $70 U.S.) bail and exempted the Nobel laureate's personal

appearance in court for the hearing next month, a court official said. Instead, Yunus will be represented by his lawyer.

Yunus faced criticism at home and abroad after a Norwegian television network aired a documentary in November that accused him of an unauthorized aid fund transfer 15 years ago.

The Norwegian government cleared him of any wrongdoing last month, but the Bangladeshi government announced an investigation of Grameen's activities.

The investigation was launched after Prime Minister Sheikh Hasina accused Yunus of playing a "trick" to evade taxes and charged last month that microlenders suck "blood from the poor in the name of poverty alleviation."

The defamation charges against Yunus stem from comments he made in an interview with French news agency AFP four years ago, in which he reportedly criticized politicians and said they were only in "power to make money." The remarks came shortly after a military-backed interim government took over amid deadly political violence in Bangladesh in 2007.