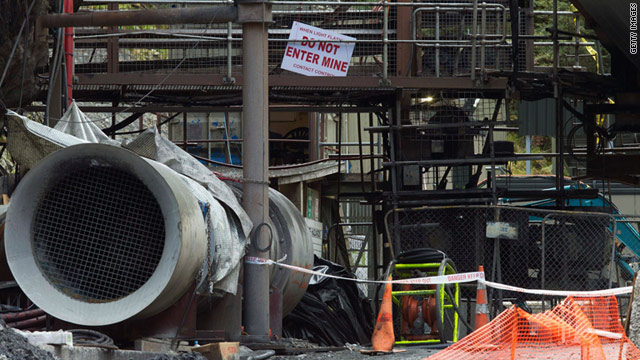 A methane gas explosion killed all 29 miners at the Pike River coal mine in New Zealand on November 19, 2010.
STORY HIGHLIGHTS
RELATED TOPICS

(CNN) -- The 29 miners who were killed in an underground explosion in New Zealand last year died immediately or a short time later, authorities said Thursday.

"The death of all 29 men occurred on the 19th of November either at the immediate time of the large explosion, which occurred in the mine, or a very short time thereafter," according to Judge Neil MacLean, the chief coroner, who ruled after hearing evidence collected during the investigation.

The 29 miners, between the ages of 17 and 62, were believed to have been spread throughout the Pike River mine, with perhaps half trapped in one area, Pike River Coal CEO Peter Whittall has said.

"The miners would have become unconscious as a result of acute hypoxic-hypoxia almost immediately," Supt. Gary Knowles, Tasman district police commander, said Thursday. "They would have remained unconscious until death ... three to five minutes later."

The first explosion at the mine, on New Zealand's South Island, happened on November 19. Authorities repeatedly said dangerous gas levels in the mine were too high for rescuers to enter, and two camera-bearing robots failed to find the men.

A second blast just as severe as the first happened November 24 and a third explosion was recorded two days later.

Nicholas Davidson, an attorney for the families, said the findings are important to them.

"Obviously gives them some comfort," he said.

"A lot of us cried, and I'm still crying inside, but it's part of the healing and we will move on," said Bernie Monk, father of miner Michael, who died in the mine.