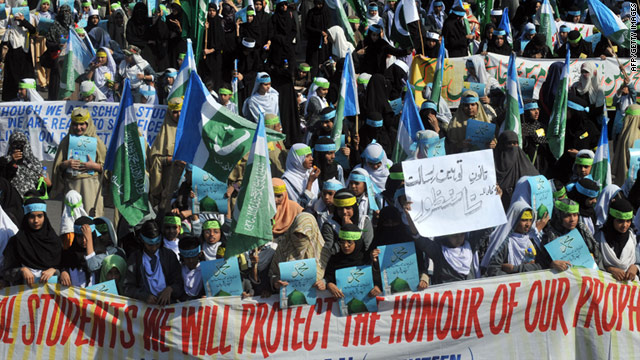 Activists of Jamaat-e-Islami Pakistan march on January 27 against the reform of the country's controversial blasphemy law.
STORY HIGHLIGHTS
RELATED TOPICS

Lodhi declined to say what Ullah wrote in his high school exam for fear of violating Pakistan's blasphemy laws himself.

The controversial laws say whoever defiles the name of the prophet shall be punished by death or imprisoned for life.

Taseer said the laws were being misused to persecute minorities.

Ullah -- the latest Pakistani to be accused of blasphemy -- is a Muslim, according to police.

He wrote the alleged blasphemous comments when taking a school exam in April 2010, police said.

It's not clear why it took months for the board of education's complaint against Ullah to reach police.

Ullah has apologized for his comments and begged the court for leniency, police said.