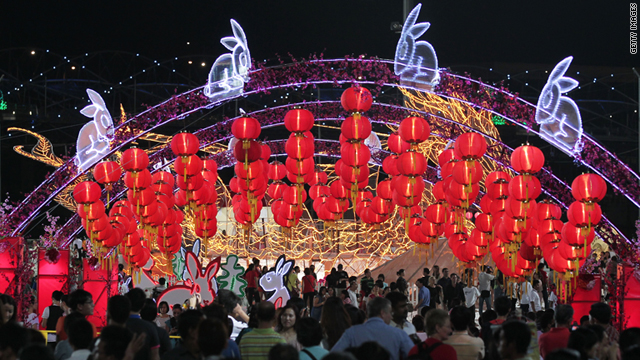 Singapore (CNN) -- As Singaporeans usher in the Year of the Rabbit, Singapore's prime minister hopes citizens will follow the fertile animal's example and reproduce.

In his annual Chinese New Year message Wednesday, Prime Minister Lee Hsien Loong noted that Singapore's fertility rate fell to an all-time low of 1.16 percent in 2010 and urged couples to have more babies. Despite financial incentives offered by the government, Singapore citizens face a population shortfall, a problem that is "extremely challenging," Lee said.

Amid rising costs for the average Singaporean, many couples have chosen to have fewer children or none at all.

Singapore's society has undergone dramatic shifts in the past few years, including rising immigration. Although some Singaporeans may "feel a sense of dislocation and unfamiliarity," Singapore needed immigrants "to reinforce our ranks," Lee said. Still, he added, "we must maintain a clear majority of local-born Singaporeans who set the tone of our society and uphold our core values and ethos."

Singapore's government has been focusing on moderating the number of new permanent residents and new citizens. "We will only select those who can add value to Singapore," Lee said.

According to government statistics, in 1990 appproximately 26 percent of the total population were foreigners, including non-citizens and permanent residents. In 2010 that number had risen to 36%.

Higher oil prices and severe weather have hit the rest of Asia with high fuel and food costs, and Singapore is no exception and will see inflation for the next few months, Lee said. He promised more government help for lower income Singaporeans.

Just as China is experiencing a property boom, Singapore has also seen a similar spike, fueled in part by foreign investors seeking higher yields for their money. But real estate is also part-obsession in Singapore, with ordinary Singaporeans keen to invest their money in property. The government has taken several measures recently to cool the real estate market, but Lee said more steps might be needed.

Looking back on 2010, Lee said Singapore's economy "roared in the Year of the Tiger." The government said the year ended with an annual growth rate of 14.7 percent. However, analysts expect the Year of the Rabbit to advance much more timidly.