Karzai: Security transfer to Afghan control will start in March 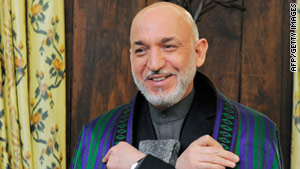 (CNN) -- Afghan President Hamid Karzai said Sunday that a critical phase in the transfer of security authority from international to domestic forces would begin March 21, a precursor to a planned full handover three years hence.

Karzai made the announcement during a speech at the Munich Security Conference, an annual gathering of diplomatic and military leaders from Western and other nations.

"We are determined to demonstrate Afghan leadership and ownership of the transition process," he said.

NATO Secretary-General Anders Fogh Rasmussen, in an interview conducted with conference organizers and posted on its website, explained this move next month marks the start of "a gradual transition to lead Afghan responsibility -- province by province, district by district." Thus, Afghans may take over full control in some locales relatively soon, while the process may take much longer elsewhere.

"I'm very optimistic about this timetable leading to Afghan (security) responsibility all over Afghanistan by May 2014," said Rasmussen. "But I have to add, that obviously this development will depend on conditions on the ground."

During his speech, Karzai credited the influx of 70,000 international forces in 2010 for improving the situation and helping Afghan security forces. He frequently mentioned the fight against the al Qaeda terror group, but did not mention the Taliban -- which was ousted from power in 2001, for harboring al Qaeda, and has been behind many attacks since.

"We have regained the initiative," Karzai said. "Security in the country is better than it was a year before, and the year before that."

In a letter to troops late last month, U.S. Gen. David Petraeus voiced a similar sentiment, saying the surge "inflicted enormous losses" on militants and weakened terror networks. It came at a steep price: Last year was the deadliest for coalition and U.S. troops in Afghanistan since the war began. There were 708 such troops killed, of which 498 were American service members.

Petraeus, the top U.S. commander in Afghanistan, said insurgents were now on the defensive in Afghanistan, and pointed specifically to progress in Kabul, where one-fifth of the Afghan population lives. Still, he cautioned that past success doesn't guarantee a smooth road ahead.

"In sum, 2010 was a year of significant, hard-fought accomplishments," Petraeus wrote. "The year ahead is likely to be a tough one, too."

President Barack Obama has promised to begin a gradual withdrawal of U.S. troops from Afghanistan starting in July, a pledge he reiterated during his recent State of the Union address.

During the speech Sunday, Karzai also acknowledged issues of corruption in Afghanistan, focusing especially on contracts that fell outside the Kabul government's control. The president outlined efforts to curb abuses, which is the past he said had "undermined the capacity of the state rather than building it."

"With the U.S. and NATO, we're overhauling the system to make contracting an instrument of good rather than bad governance," he said.

By 2015, Karzai predicted that Afghanistan will have "binding agreements with the United States and long-term partnerships with NATO" -- noting that the shift in security responsibility does not mean a clean break with international forces that have been engaged there for nearly a decade.

As to NATO's role, the current head of the military and political Western alliance said he expected that some of its troops may still be in Afghanistan even after 2014.

"I ... foresee a continued international presence, beyond the date when our combat mission ends, with the aim to assist the Afghans," Rasmussen said.

Karzai closed his speech Sunday by again thanking other nations for committing financial resources to Afghanistan, as well as the human sacrifice many have made. And he urged them to continue to help, claiming Afghan's prosperity and security was vital to the interests of the region and the world.

"Some journey is left and that journey will not be easy," Karzai said. "But it's a journey worth taking."