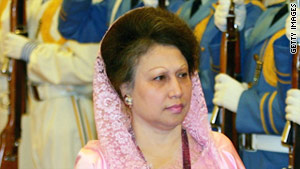 Dhaka, Bangladesh (CNN) -- Schools and businesses closed and police fought with protesters Monday as thousands of opposition party supporters took to the streets in a daylong strike against the government.

The opposition Bangladesh Nationalist Party, led by former Prime Minister Khaleda Zia, called the strike to highlight what it said was the government's failure to curb commodity prices and regulate the country's capital market.

The opposition party said the strike was mean to protest the "government's failure to run the country effectively."

But Bangladesh Prime Minister Sheikh Hasina on Monday the strike was meant to destabilize the country ahead of the Cricket Word Cup. Dhaka is set to host the opening ceremonies on February 17.

As the strike began in the morning, the pickets and anti-riot police fought in many districts, including the capital of Dhaka.

A huge contingent of police were deployed in the nation's capital to avert any violence, said Dhaka's police chief, Benazir Ahmed.

Schools and businesses were shut in the capital and elsewhere. Most private and public vehicles remained off the road during the dawn-to-dusk strike.

On Sunday night, at least 10 public buses in Dhaka were set on fire in a pre-strike violence, police said.

The Dhaka Stock Exchange index slide led to series of street demonstrations since mid-December. Stocks fell for a third third consecutive day on Monday prompting a group of investors to bring out processions to drum up support for the opposition strike.

Bangladesh's ruling Awami League won a landslide victory in 2008 general elections, but it had to concede a major defeat to BNP in last month's local elections.