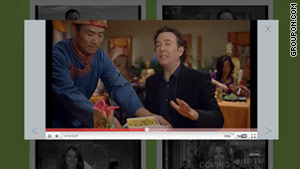 A TV ad by Groupon with actor Timothy Hutton was intended to generate support for the Tibet Fund.
STORY HIGHLIGHTS

Beijing (CNN) -- The Super Bowl usually comes and goes without much notice in China.

However, this year, America's famous sporting event took a different turn when a TV ad featuring Tibetans and a Chicago-area restaurant triggered angry comments from internet users in China.

The ad by Groupon -- a U.S.-based company that helps online group buyers get discounts -- was to generate support for the Tibet Fund, an organization that aims to preserve Tibetan culture.

During the ad, actor Timothy Hutton appears to be served a meal at Himalayan Restaurant in Chicago. He says, "The Tibetan people are in trouble. Their culture is in jeopardy."

Then in a seemingly sarcastic tone, Hutton adds, "But they still whip up an amazing fish curry!"

Hutton then talks about a 50% discount he and other Groupon users got at Himalayan Restaurant in Chicago.

The joke fell flat with Chinese internet users at a time when the venture capital-backed Groupon is aggressively expanding its services and staffing in mainland China.

Tibet has long been a source of domestic and international tension for China, which established control over the region in 1951. The Dalai Lama went into exile in 1959 following an uprising against the communist leadership.

Tensions related to religious freedom, human rights, development and political sovereignty have plagued the region periodically ever since.

"Groupon is doomed to failure now in China," wrote user Yageboo on Sina's Weibo. "Groupon's lax approach to the Chinese market is not going to work!"

Sina.com user cnbuff410 asked, "Groupon ... you play a 'free Tibet' advertisement during the Super Bowl ... do you actually want to enter the Chinese market?"

Vivek Kunwar, a co-owner of Himalayan Restaurant in the Chicago area, saw the ad during a Super Bowl commercial break.

"When we saw it, it was an 'uh-oh' moment, even for me," Kunwar said in a phone interview.

"There was nothing that we could do ... we were not even involved in the shoot."

However, not everyone was affected.

One online user posted, "Groupon is an American company with a conscience."

The restaurant first opened in 2003 and has enjoyed a strong community customer base.

"When we were shown the script, it sounded pretty good. However, the way the ad was made was not in good taste," Kunwar said.

"Our name was used, but the way the ad was presented really wasn't done very well. It could offend people definitely."

Phone calls and e-mails to Groupon headquarters and its Beijing office went unanswered on Sunday evening. But the company posted a message on its official Twitter account, saying, "Like standing too close to a rainbow, viewers' hearts are warmed" by the Super Bowl ad.

Kunwar said though the ad had a strong message, its presentation was wrong.

"It came out the opposite of what they were hoping for," the co-owner said.

Kunwar said the ad was not filmed in his restaurant but on a set.

"From our part, we hope people realize it was not us," Kunwar said.

"We participated because we liked the cause. (Groupon) should've considered the sensitivity of the matter," Kunwar said, adding that Groupon has not reached out to the restaurant since the commercial aired.

"Nobody has called me, but I definitely do want to talk to their people and ask them what they were thinking," he told CNN.

"It makes Groupon look bad, it makes us look bad, and it was not the way it should've been done."

Kunwar said he expects the three-restaurant chain will receive complaints, and he is concerned about future business.

Tibetans and Chinese in their community may "be a little unhappy with it," he said.

"Sometimes brands try to create impact by being a big risqué or a bit confrontational," Ally said. "Brands use this kind of shock to generate awareness for their brand. ... They think that maybe it would get people talking about Groupon in a positive way."

Groupon has said China is a priority for the company.