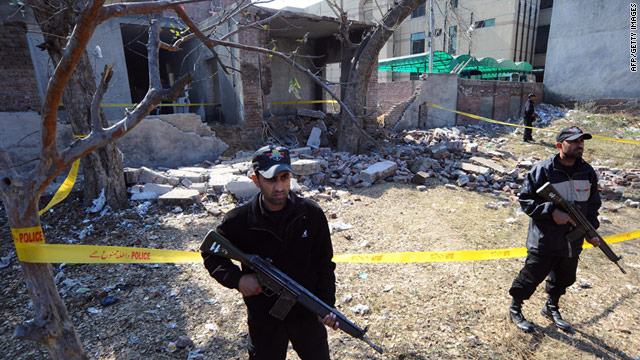 Police stand guard after a bomb blast behind the police building in Gujranwala, near Lahore on February 9, 2011.
STORY HIGHLIGHTS
RELATED TOPICS

Police chief Ghulam Mehmood Dogar said the three bombs were planted on Tuesday night at a police station, an office of a senior police official and a police barracks.

They were detonated by remote control this morning in the city of Gujranwala, 70 kilometers northwest of Lahore, Dogar said.

Three police officers were injured and parts of the buildings were damaged.

The first two explosions happened within 30 minutes of one another, and the third bomb was detonated about three hours later.

Gujranwala has been largely free of the militant violence plaguing parts of Pakistan.

Police said there was no immediate claim of responsibility for the attacks.

On Monday, two people were injured when in back to back explosions at police stations in the southern port city of Karachi.