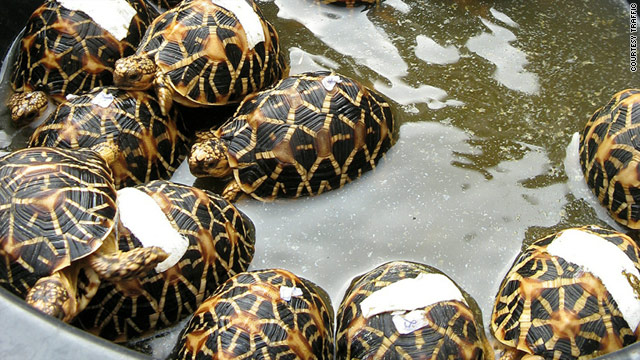 These Indian Star tortoises were seized from one man's luggage at a Bangkok airport which also hid spiders, snakes and lizards.
STORY HIGHLIGHTS

(CNN) -- An alleged would-be smuggler was caught at a Thailand airport with dozens of rare wildlife -- including snakes, squirrels and tortoises -- stuffed into three suitcases, a wildlife monitoring organization says.

The Indonesian man, whose name was not released, was stopped at Suvarnabhumi International Airport on Wednesday, according to a news release from Traffic, an organization that fights wildlife trafficking.

The man had purchased the wildlife at Bangkok's Chatuchak Market and was attempting to smuggle them out of the country, the organization said. He was stopped after a regular luggage scan revealed the animals.

The situation is totally unacceptable in a country that claims to be effectively addressing illegal wildlife trade
--William Schaedla, Traffic
RELATED TOPICS

But that wasn't all that the man stuffed into his luggage. Authorities also found 34 ball pythons, two boa constrictors, several milk snakes, corn snakes and king snakes and one hog-nosed snake, Traffic says.

And, to top it off, there were 18 baboon spiders, 22 common squirrels and one African grey parrot inside the suitcases, Traffic says.

"It speaks well of a few alert enforcement authorities when such seizures happen, said the organization's regional director, William Schaedla. "The airport authority is to be commended. However, one really has to question how Chatuchak Market, which is located just down the street from both wildlife protection and nature crime police offices, can continue these illegal mass sales."

Chatuchak Market is known for being a hub for the illegal trade of rare species, Traffic contends.

"Frankly, the situation is totally unacceptable in a country that claims to be effectively addressing illegal wildlife trade," Schaedla said.

The man, who was taken into custody, faces wildlife smuggling charges, the organization said.