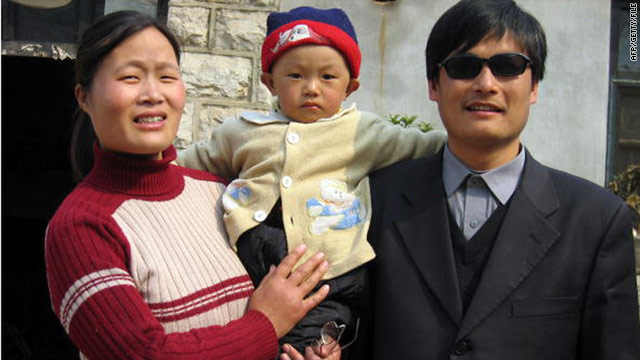 Chen Guangcheng and his wife Yuan Weijin, seen in this 2005 file photo, are reported to have been beaten by authorities.
STORY HIGHLIGHTS

Beijing (CNN) -- One of China's most prominent activists and his wife are under house arrest and have been beaten by authorities, two human rights groups, China Aid and Chinese Human Rights Defenders said Friday.

In a home video released Wednesday by U.S.-based rights group China Aid, Chen Guangcheng described the dire and frustrating conditions of his house arrest, since he was released from jail in September. He said police have threatened to throw him back in jail without recourse.

"I've come out of a small jail and entered a bigger one (house arrest)," Chen, 39, said in the video, wearing sunglasses and a black jacket. "Those people stand at the four corners of my house and spy on my family and monitor what we do ... floodlights have been installed around my house and surveillance cameras."

Vehicles surround his home, and his land line and mobile phone have been cut off. Chen said anyone in the community who attempts to help him is threatened by the authorities.

"My house is basically under surveillance 24 hours a day and we can't get out of the house and the same thing happens to my wife," described Chen. "Only my mother can go out to get something for us to eat and stay alive."

On Friday, the Hong Kong-based China Human Rights Defenders reported Chen and his wife Yuan Weijin were severely beaten after the public release of the video showing Chen discussing his house arrest at home.

"According to our source, the beating was not light but also was not life threatening," Wang Songlian of China Human Rights Defenders told CNN in a phone interview.

Chen and his wife have not been allowed to visit a hospital or see a doctor, the organization said. Cheng has been ill for several months now with an intestinal infection and he has not been able to seek medical attention, according to CHRD.

"What they do now is is what I call thuggery," Chen said in the video. "First they provoke you through various means and stir up trouble. After all, no matter how they beat me, the judicial organs will turn a deaf ear since it is done on the order of the Party Committee."

Chen is a well-known activist in China.

In 1998, he led farmers in Yinan County, where his hometown is located, to protest against a river-polluting paper factory and persuaded an international donor to fund a deep well for drinking water as alternative to the polluted river water.

He later set up a center for rights of the handicapped and filed a case against a public transport company in Beijing for refusing to honor the law providing free rides to them.

Chen brought class-action lawsuits on behalf of families impacted by China's enforcement of family-planning laws, which limit couples to one child.

After his years of activism, the People's Court of Yinan County sentenced Chen to four years and three months in prison in August 2006 on charges of "willfully damaging property" and "organizing a mob to disturb traffic."

Last month, in the lead up to Chinese President Hu Jintao's visit to the United States, Secretary of State Hillary Clinton called for the release of Chen, Nobel Peace Prize laureate Liu Xiaobo, along with other political prisoners who are "enduring enforced disappearances."