Man charged in killing of Pakistani politician gets Valentine's gifts 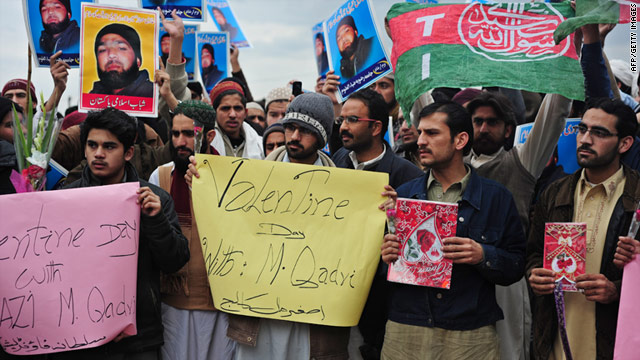 Supporters of Mumtaz Hussain Qadri brought him Valentine's flowers and cards on the same day he was charged with murder.
STORY HIGHLIGHTS
RELATED TOPICS

Islamabad, Pakistan (CNN) -- Supporters of an accused assassin of a Pakistani politician brought him Valentine's flowers and cards Monday, the same day a judge charged him with murder and terrorism acts, his lawyer said.

Pakistani police have said Mumtaz Hussain Qadri confessed to gunning down Salman Taseer, the governor of Punjab Province, outside an outdoor market in Islamabad last month.

The suspect was serving as Taseer's security guard at the time of the shooting.

The charges of murder and committing an act of terrorism each carry the possible death penalty in Pakistan.

When the judge asked Qadri to enter a plea, he denied committing a crime, said Raja Shuja Ur Rehman, his lawyer.

"I acted against a blasphemer per the guidelines of the Quran and the teachings of the prophet Muhammad," Qadri told the judge, according to his lawyer. "I didn't kill an innocent person."

Pakistani authorities held Monday's hearing inside the jail where Qadri is being kept for security reasons.

Around 50 people stood outside the jail bearing flowers and Valentine's wishes for the accused assassin, his lawyer said.

It wasn't clear whether jail officials delivered the flowers to Qadri.

Since the shooting, Pakistan's hard-line religious groups have congratulated Qadri and held demonstrations calling him a hero, while condemning anyone who tries to change Pakistan's blasphemy laws.

The next court date for Qadri is scheduled for February 26th when the prosecution is scheduled to present its evidence.