How microbloggers vault the 'Great Firewall of China' 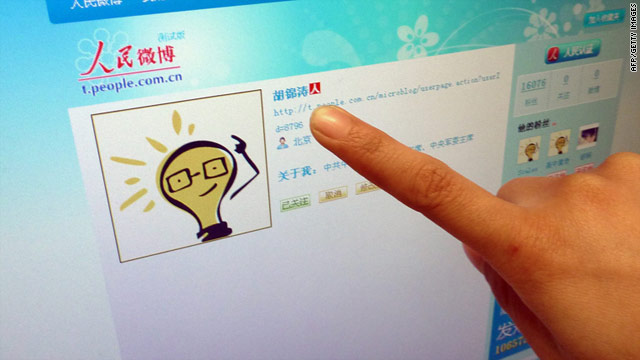 An Internet user points to the account page of China's President Hu Jintao on a microblog operated by the official People's Daily.
STORY HIGHLIGHTS

Hong Kong, China (CNN) -- Type the words "Egypt," "Tiananmen" or "June 4th, 1989" into any of China's microblogging sites and the search will return this message: "According to relevant law and regulations, the results are not displayed."

But type in "8x8" -- shorthand for 64, in turn shorthand for 6/4 or June 4th; the date of the Tiananmen crackdown -- and you may catch some lively and surprisingly open exchanges on the social networking sites.

Censorship has been a way of life in China for more than 60 years and the cat-and-mouse game of getting around it is a high art.

References to "the Pharaoh nation" instead of Egypt, misspelling democracy as "democrasy" or "democrazy" or even scanning written comment and posting it as an image are just some of the ways microbloggers cheat the bots that seize on keywords and bring them to the attention of censors employed at social networking sites such as Renren and Sina Weibo.

Others use a mixture of street slang or dip in and out of one or more of China's 45 regional dialects to disguise comment. Others still are either past caring whether their comments are detected or like to test their nerves and those of the censors.

"We could have done it [overthrown the government] 22 years ago, but in the end we failed," laments one microblogger from Guangzhou on Sina Weibo, comparing Egypt with the Tiananmen protests of 1989. "Now we can only dryly witness another's happiness and project our dreams on it, imagining it."

"Even though he [former Egyptian president Hosni Mubarak] was forced to resign, he still deserves some respect. Here [China], nothing ends without the use of force or bloodshed."

Censorship and restrictions are a fact of life. The government has already closed down some Twitter clones
--Gang Lu, Chinese internet entrepreneur

Microblogging has exploded in China, presenting a serious pressure point to a government that has built an industry around restricting comment. Microblogging campaigns have targeted corruption, suspicious lawsuits, kidnapped children and the plight of activist lawyers.

Unrestricted social networking sites such as Facebook and Twitter are banned in mainland China and only determined or relatively wealthy individuals use virtual private networks (VPN) to get around the Chinese internet restrictions which have been dubbed "The Great Firewall of China."

Chinese social networking sites such as Renren employ as many as 500 censors -- all of them centrally located in the Chinese city of Wuhan -- to make sure that comment on the site does not contravene Chinese information laws.

Nevertheless, strong comment still makes it online and for many of the new microblogging sites, the banks of censors are simply a requirement in China of doing business in a new industry.

"Compared with two years ago, I would say the government is much more relaxed now," said Gang Lu, a Chinese internet entrepreneur who moderated at the Social Media Week Hong Kong event last week. "There is a lot more negative comment on microblogging sites than there used to be."

"From the operators' point of view, censorship and restrictions are a fact of life. The government has already closed down some Twitter clones," said Lu. "Almost half the team at Sina Weibo are engaged in monitoring content at some level. Even so, Sina is very bold but they are under pressure as well -- they still have to be responsive to the government."

He said one of the positive signs was that local officials -- from police to local mayors and even China's President Hu Jintao -- now have their own microblogs.

"It may just be for show, but I think it's a good sign," he said. "It shows that they are at least prepared to listen and are responding to the phenomenon of microblogging."

The size of the microblogging community in China is growing exponentially. There were 420 million internet users in China in June, 2010, or about 35 per cent of the entire population, according to statistics from the China Internet Network Information Center, a non-profit group affiliated with the Ministry of Information Industry.

Of this number, Sina Weibo -- a site similar to Twitter and run by China's largest internet portal Sina Corporation -- says it has more than 80 million users and is adding 10 million new users per month.

"At this rate, Sina estimates that the microblogging market in China will be mature within two years," said Lu.

High-profile microblogging campaigns have included a site dedicated to reuniting street children with their parents. Called "Take a snapshot and save the child beggars," it calls on the public to post photos of street children to help reunite them with their families and raise awareness about the problem of kidnapping in China.

Other sites have given people an unprecedented voice on local issues such as petty corruption.

This month 23-year-old Li Qiming -- a Chinese man who killed a college student while drink driving and then tried to use his father's name as a police official to escape punishment -- was sentenced to six years' in jail, sparking a furious reaction on microblogs where the verdict was condemned as too lenient.

Bigamy -- condemned by the Chinese Communist Party but unofficially practiced by the wealthy and powerful in China -- has become the latest microblog hot topic, along with other previously uncanvassed social issues.

Qiu Xiaohua, a former chief of China's National Bureau of Statistics (NBS) who was sentenced to a one-year term of imprisonment in 2007 for bigamy, opened a microblog account this month which attracted 37,300 followers within days despite the fact that he posted just two messages online.

Most Chinese Web users, however, are relatively unconcerned about government censors and use microblogs to catch up on entertainment and gossip.

Famous microblogs no sooner emerge than parody sites are set up. A mirror site of the child anti-kidnapping campaign called "Take a snapshot and save an 'over aged' single woman or bachelor" is the latest microblog parody to go viral, making fun of the pressure young people come under from their families to bring home a marriageable candidate for the Chinese Lunar New Year.

Since the dating microblog opened on February 11, it has attracted more than 31,000 followers and has become such a sensation that a Shenzhen jewelry store has offered three free rings to the first three women successfully "rescued."