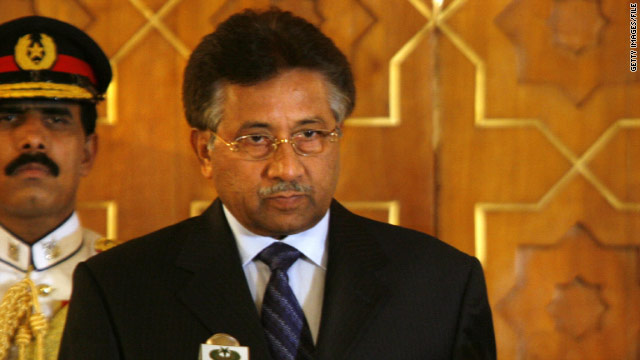 Former Pakistani President Pervez Musharraf has been living in exile in London but is considering a political comeback.
STORY HIGHLIGHTS
RELATED TOPICS

Prosecutors claim that an investigation shows Musharraf was responsible for not providing adequate protection for Bhutto and has not responded to a prosecutor's request to answer questions, prompting the court-ordered arrest warrant.

Authorities were unable to serve an arrest warrant issued last week because Musharraf is not in Pakistan, prosecutor Chaudhry Zulfiqar Ali told CNN.

Ali said the court ordered authorities to serve the new warrant at all of Musharraf's residences, including those abroad.

Musharraf is currently living in self-imposed exile in London.

Ali said the court was adjourned until March 5.

Musharraf went to London after resigning in 2008.

He decided to start a political party last year and make a comeback. He has said he wants to return for a presidential run in 2013 because he sees suffering in Pakistan and doesn't see a political party offering a solution.