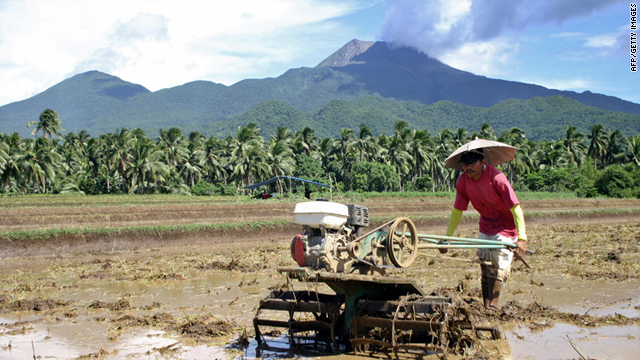 A farmer prepares his farm for planting rice in San Juan village in Sorsogon province under the restive Mount Bulusan volcano seen in the background, 21 June 2006.
STORY HIGHLIGHTS
RELATED TOPICS

Are you within view of the volcano? If it's safe, please share photos, footage with CNN iReport.

(CNN) -- Philippine seismologists issued an alert on Mount Bulusan Sunday after the Luzon Island volcano erupted twice during a 24-hour period, according to a bulletin released by the nation's volcano-monitoring agency.

However, the Philippine Institute of Volcanology and Seismology (PHILVOCS) said the eruptions posed little threat to the villages surrounding the Luzon Island volcano. Most of the villages lie outside the 4-kilometer (2 1/2-mile) danger zone, the bulletin stated.

Philippine volcanologists, according to the agency, aren't expecting Mount Bulusan to erupt again soon. The volcano is located about 249 kilometers (155 miles) southeast of Manila.

The area immediately surrounding the Bulusan Volcano is mostly rural. There are several villages, but most are outside the danger zone, according to PHILVOCS. The most recent eruption, which took place before dawn local time on Sunday lasted about 20 minutes, according to the agency.

In declaring an "Alert Level 1," the agency warned nearby residents not to enter the 4-kilometer "permanent danger zone" because of possible steam and ash explosions. Area residents were also warned of the possibility of flooding if heavy rains push sediment-filled streams out of their banks.