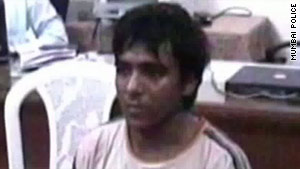 Pakistani Mohammed Ajmal Kasab was sentenced to death last year for his role in the 2008 terror attack on Mumbai.
STORY HIGHLIGHTS
RELATED TOPICS

New Delhi, India (CNN) -- The only surviving gunman from the 2008 three-day terror attack on Mumbai will challenge his conviction in India's Supreme Court, his attorney said.

A trial court handed down a death sentence last year for Mohammed Ajmal Kasab, a Pakistani, on charges of murder, conspiracy and waging war on India. On Monday, the Mumbai High Court upheld the conviction and the sentence.

Kasab's lawyer, Farhana Shah, said she had briefed her client about the options of appeal available to him.

Convicts on death-row in India reserve the right to challenge the sentencing in the nation's Supreme Court. They can also file a mercy petition with the country's president if the Supreme Court also turns down their plea.

Kasab, she said, has agreed to appeal to the Supreme Court in New Delhi. He is also expected to get a new lawyer, Shah said.

During the raids, 10 men attacked buildings including the luxury Tajb Mahal Palace and Tower and Oberoi-Trident hotels, the city's Victoria Terminus train station, and the Jewish cultural center, Chabad House. More than 160 people died in the three-day coordinated attack.

Indian forces killed nine suspects in the attack. Their bodies were embalmed and kept in a hospital morgue as some local Muslim groups refused them a burial in their graveyards, saying the attackers were not true followers of Islam.

An Indian official in Maharashtra state, where Mumbai is located, said a burial took place in January last year. He did not give the date or the exact location of what he described as a secret funeral.

The Mumbai attack derailed a fragile peace process between nuclear-armed India and Pakistan for about 15 months.

This year, the two nuclear-capable nations announced resumption of their fully-fledged dialogue after a series of high-level meetings over the past one year.