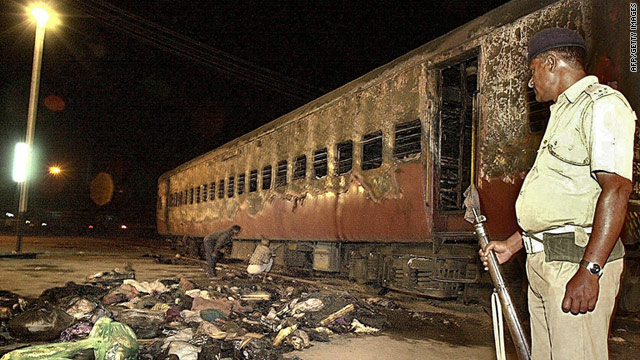 New Delhi, India (CNN) -- An Indian court has handed down death sentences to 11 people for their role in the 2002 burning of a train carrying Hindu activists in the western state of Gujarat.

A life sentence in India runs for 20 years, and a prisoner can apeal after he has served 14, Panchal said. The 20 who were sentenced to life have spent nine years in jail that will count toward their sentence, he said.

A suspected Muslim mob attacked the Sabarmati Express near the town of Godhra on 27 February, 2002, killing more than 50 people, most of whom were Hindu pilgrims.

The Hindu pilgrims were returning from the north Indian town of Ayodhya where they had been demanding that the government build a temple on the ruins of a 16th century mosque.

The train fire sparked days of rioting in which more than a thousand people, mostly Muslims, were killed.

Defense attorney I.M. Munshi said he would appeal the convictions.

"I am not able to swallow it," Munshi said.

"This is not the final verdict. It's always appealable," he said, referring to the rights of the convicts to challenge the sentencing in higher courts.

Death-row prisoners in India can file appeals in the Supreme Court in New Delhi if their petitions are turned down by lower courts. A mercy petition to the Indian president is the ultimate option they have if the top court too dismisses their pleas.

Police had charged 94 men for setting fire to the train.

Sixty-three of the accused, including one of the main conspirators, were acquitted Tuesday due to lack of evidence, prosecutors said.