Counterfeits in the grape wall of China 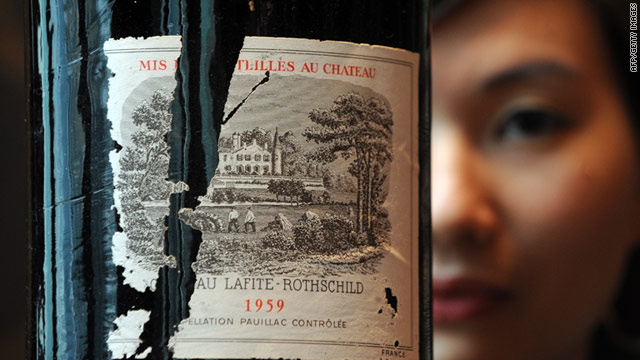 Empty bottles of Chateau Lafite can fetch as much as HK$10,000 (US$1,500) on the black market in China.
STORY HIGHLIGHTS

Hong Kong, China (CNN) -- Wine tastings in Hong Kong begin the same way as anywhere else in the world: Connoisseurs are poured a vintage, they hold it up to the light to look at the color, they swirl the wine in the glass and savor the bouquet, they take small sips to assess the wine's tangy tannin-like "finish."

Later, the evening ends with the crash of shattering glass as the wine merchants drive hammers through the empty bottles.

Websites and even wine cellars in mainland China openly offer to buy empty bottles and rare and expensive vintages go for premium prices -- especially those in mint condition with no spillage or smearing on the label. Rebottled and recorked with a cheaper wine -- often produced in China -- they reappear on the market purporting to be the vintage on the label.

"Smashing the bottles is really not that bizarre," says Simon Tam, Head of Wine for China at the auction house Christie's, adding that it normally takes several smart taps with a hammer before the bottle shatters.

"Last year we had a tasting of a Chateau Mouton Rothschild and the year before that a Chateau Lafite, which is of course a household name, and we absolutely insist on smashing the bottles with a bloody hammer.

"I haven't been approached myself, but friends in the industry tell me that this is the market price for an empty bottle of Chateau Lafite '82," he said.

In mainland China, where wines are fetching the kind of prices at auctions in Hong Kong that have some analysts comparing it to the tulip bulb mania of the 1630s, faking vintage wines is a big business. Estimates vary but counterfeits are conservatively believed to occupy 5 percent of a $13.7 billion market in China.

Tam says wine fakes in China run the gamut from the glaringly obvious to the remarkably subtle.

"Sometimes it's as subtle as putting, say, a Chateau Lafite '85 -- which is quite a lot cheaper -- into a Chateau Lafite '82 bottle. And at the other end, there was a very big bust by Hong Kong customs of a consignment of Mouton Cadet, which is not the most expensive wine on Earth, but someone had gone to the trouble of counterfeiting it," he said.

The counterfeits are now part of the landscape in a China where high rolling tycoons regularly bid eye-watering sums at auctions in Hong Kong, which has become the undisputed hub of the China wine boom since it introduced a zero tax regime in 2008. Last year, a six-liter bottle of Chateau Lafite '82 went for HK$363,000 ($46,700), nearly twice its presale high estimate.

The U.S. wine auctioneers Zachys Wine Auctions made sales of more than HK$71 million ($9.1 million) and sold 99 percent of the lots at its first wine auction of the year in Hong Kong in January in a strong sign that China's love affair with expensive wine -- and especially all things Lafite -- is showing no sign of cooling.

According to Fongyee Walker, a Beijing-based wine consultant with Dragon Phoenix Fine Wines, the problem of counterfeits is acute with well-known wine labels.

"The problem is pretty bad, especially for Lafite," she says. "I was sent a sample bottle of fake Lafite and it looked like the real thing. They'll often ask you to visit their facilities where they are making the whole product -- right down to the wooden boxes."

After Lafite -- where the massive prices paid for a 1982 are now inflating the price of the winemaker's other inferior vintages on the basis of the label alone -- the Australian wine Penfolds is one of the most recognized wine labels in China. A rash of wines appeared with the same distinctive typeface on the label offering "Benfolds" wines.

Other denominations are now registering their trade name in China so that they can launch legal action against the counterfeiters. Much of the problem, however, feeds into Chinese culture where consumers crave the sophistication of wine and appearances are everything.

Walker says western importers underestimate how much of the wine ends up as gifts, referring to the mainland custom of giving presents to secure any kind of favor or even as outright bribes.

"The packaging means more than anything else. It's a shame because many Chinese consumers prefer Chilean or Australian wines but because 'face' is everything, a wine with a Bordeaux label is going to gift better," she says.

She said even if a fake is discovered, many people wouldn't risk a loss of face by pointing it out and are just as likely to pass on the gift to someone else.

"Gifting is really bad for building a brand," she says.

But Gregory De'eb, general manager of the Crown Wine Cellars, which stores about HK$1 billion of collectable wine in a network of converted Second World War bunkers in Hong Kong, blames Europe for much of the high-end fake wine in circulation.

Wine in China attracts a 38 percent tax, making it uneconomic to export the kind of fakes that could end up at quality wine auctions in Hong Kong.

"In fact, Hong Kong customs use a simple test to catch they fakes -- they are looking for wines coming from a high taxation area to a low taxation regime," De'eb says.

Despite urban legends of the nouveau riche in China mixing $1,000 vintages with Sprite and downing it in shot glasses at nightclubs, De'eb says the Chinese market is gaining rapidly in sophistication.

"I would argue that the Chinese palate is now better than the average palate in Europe and the United States because they're newer to it and they're more open and they're coming to it without prejudice," he said.