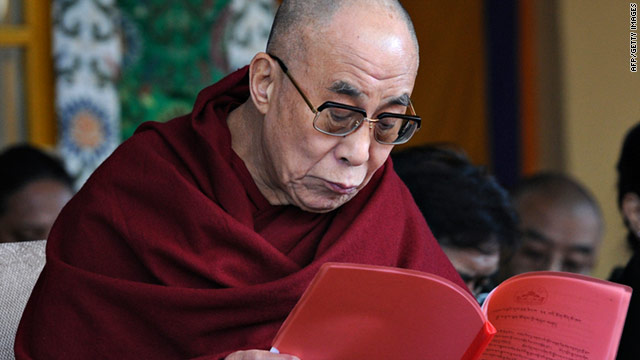 The Dalai Lama reads a statement during a ceremony marking the 52nd anniversary of the 1959 uprising.
STORY HIGHLIGHTS

(CNN) -- The Dalai Lama has announced his intention to relinquish his political responsibilities as head of Tibet's government-in-exile.

He made the announcement during a speech to mark the 52nd anniversary of the failed 1959 Tibetan uprising against Chinese rule -- an event which forced him to flee into exile in neighbouring India, where he has lived ever since.

The Dalai Lama has been the most prominent figure in the fight for "meaningful" Tibetan autonomy since it was occupied by Chinese troops in 1950. Beijing has long claimed Tibet, situated to the north of the Himalayas, as part of China.

What does this mean? Is he retiring completely?

Dalai Lama: Sooner or later I have to go

At present, the 14th Dalai Lama has a political and religious function. He will stand down as the political leader of the Tibetan government-in-exile based in India, while retaining his lifelong religious role as the head of the Gelup School of Tibetan Buddhism. He will also continue as Tibet's spiritual leader.

During the next session of the Tibetan parliament-in-exile on March 14, the Dalai Lama will formally propose an amendment to its constitution -- known as the Charter for Tibetans in Exile -- allowing him to devolve political authority to an elected leader known as the Kalon Tripa, or prime minister.

He told CNN in October that he would like to retire at some point. "I'm also a human being. ... Retirement is also my right," he said while on a speaking tour of North America.

According to the head of a Tibetan pro-democracy group, news of the Dalai Lama's "retirement" plan comes as no surprise. "It's all part of a process that has been going on for over 10 years," said Stephanie Brigdon, Director of London-based Free Tibet.

"The Dalai Lama has been trying to delegate more and more political authority to the Tibetan government-in-exile. Part of that is to manage the process of what happens when he leaves the stage, because the Chinese government for a very long time has been attempting to control the reincarnations of Tibetan Lamas inside Tibet."

"In 2005 they instituted an order in which they actually spoke specifically about identifying a Dalai Lama. So this is about claiming back some of that authority over who will govern the Tibetan people."

According to the group, one of the core motives behind what became known as "State Order No. 5" is to control the selection and education of the next reincarnation of the Dalai Lama, in terms of "stamping out loyalty and devotion to the current Dalai Lama and eradicating his influence in Tibetan society."

How has China reacted to the news?

The Chinese foreign ministry panned the announcement, calling the Dalai Lama a "religious crook," who is trying to splinter China.

My desire to devolve authority has nothing to do with a wish to shirk responsibility. It is to benefit Tibetans in the long run.
--Dalai Lama
RELATED TOPICS

"He is the mastermind of political activism," said ministry spokeswoman Jiang Yu. "He has said many times he is leaving but this seems to be one of his tricks to deceive the international community."

Qiangba Puncog, head of Tibet's delegation at China's ongoing annual parliamentary session, blasted the announcement as "another political show," according to the Xinhua news agency. "Whatever moves they (the government-in-exile) take, the Dalai Lama's 'retirement' or electing a successor, they will all be illegal and will not be recognised."

What about ordinary Tibetans?

In his speech the Dalai Lama revealed that many of his supporters both inside and beyond Tibet had urged him to reconsider his decision.

He said: "Since I made my intention clear I have received repeated and earnest requests both from within Tibet and outside, to continue to provide political leadership. My desire to devolve authority has nothing to do with a wish to shirk responsibility. It is to benefit Tibetans in the long run."

Will it weaken Tibet's pro-democracy movement?

Not according to Brigdon. She described it is a very positive development in that it will refocus attention on the issue of Tibet rather than the Dalai Lama himself.

"Clearly His Holiness has done an extraordinary amount of work travelling across the globe bringing awareness of the Tibet issue," she said.

"But what we have seen in the last few years is that the Dalai Lama doesn't actually talk about Tibet as an issue. He talks much more broadly about issues such as world peace. While many people know who the Dalai Lama is, increasingly fewer people know what he has been associated with."

Many Tibetans want independence from China, though the Dalai Lama has said he does not advocate violence or a separate and independent Tibet. He wants a genuine autonomy that preserves the cultural heritage of Tibet.

But in 2008 Tibetan resentment against Chinese rule spilled over when a peaceful protest in the capital Lhasa turned violent, as mobs burned vehicles and shops and attacked ethnic Chinese settlers.

China blamed the Dalai Lama for inciting protesters -- an allegation he has denied -- while Tibetan exiles claimed more than 200 people died after a clampdown by Chinese security forces. Beijing denies this, saying 22 people, mostly Chinese civilians, died during riots.

Will the Dalai Lama's successor be as effective?

Brigdon said a newly elected prime minister would alter the dynamic on the international stage, in that world leaders had previously met with the Dalai Lama in his capacity as a religious leader rather than as a political leader.

However his meetings with international leaders -- including U.S. President Barack Obama, German Chancellor Angela Merkel and French President Nicolas Sarkozy -- have been a constant source of diplomatic tension with China.

When the Dalai Lama was awarded the Nobel Peace Prize in 1989, China threatened to sever economic ties with Norway if the Norwegian leadership attended the ceremony.

"It will be interesting to see how many agree to meet an elected political representative of the Tibetan government-in-exile," said Brigdon.